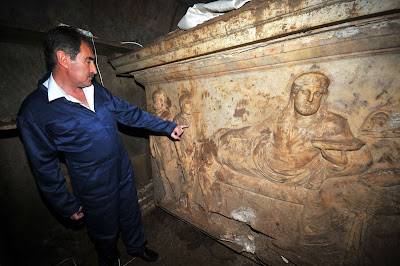 Archaeology Magazine has posted its feature on the top ten discoveries of the year. One is the tomb of Hecatomnus, King of Caria in Asia Minor in the 4th century BC. Hecatomnus was the father of Mausolus, whose tomb was one of the Seven Wonders of the World and gave us the word "mausoleum." The sarcophagus was discovered by looters who tunneled under the the Temple of Zeus near Milas. They seem to have sold most of the objects from the tomb before they were caught trying to sell the sarcophagus (above).

I confess to being weirded out by the market in stolen antiquities. It seems to me that the whole point of owning a famous masterpiece is to show it off; whence comes the pleasure of owning a famous masterpiece that you have to keep in a secret vault? I know people keep legitimate art treasures locked away as investments, but isn't a stolen work a very risky investment? This speaks to me of minds deeply caught up in their own games, deriving pleasure from the act of keeping their guilty secrets. Do they laugh at the ignorant, innocent people around them who can't guess at what they keep hidden? Perhaps these people even sit on the boards of eminent museums where they mouth the usual platitudes about the crime of stealing culture and need for art to be accessible to the public, all the while grinning to themselves about their vaults of ill-gotten treasure.

Below, Mausolus himself, a statue in the British Museum.