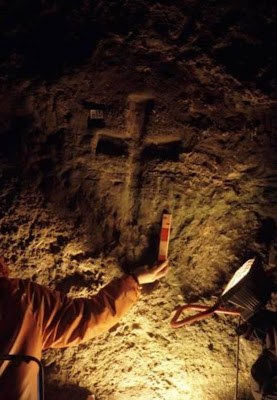 The Viking settlers of Iceland recorded that when they reached the island around AD 870 they found it empty of people. However, later Icelandic writers mentioned rumors of European predecessors, possibly Irish monks, and Irish monks themselves also recorded hints of settlements on lands to the north. Here is Cicuil, an Irish monk writing around AD 825:

It is now thirty years since clerics, who live on the island [Thule] from the first of February to the first of August, told me that not only at the summer solstice, but in the days round about it, the sun setting in the evening hides itself as though behind a small hill in such a way that there was no darkness in that very small space of time...

Now archaeologists have found the first good evidence of an Irish presence in Iceland. In a man-made cave called Seljalandshellar they found a stone cross carved on the wall in the style of 9th-century stone-cut crosses from northern Ireland or the Scottish islands. Excavating outside the cave mouth they found what looks like debris from digging out the cave beneath a layer of volcanic ash from an eruption in 871; beneath that same layer they found what may be the hoof prints of sheep. It isn't much, but when you consider that these Irish monks were famously ascetic, and they ones who went to Iceland probably did so because the life in an Irish monastery wasn't rigorous and demanding enough for them, you wouldn't expect to find piles of pottery.
Posted by John at 7:55 AM