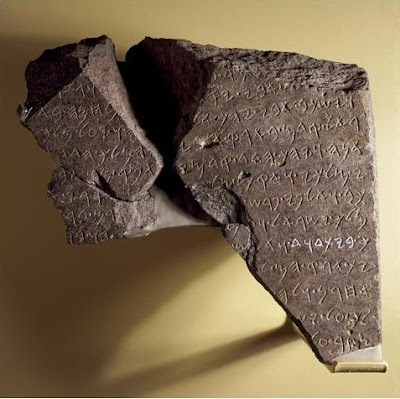 The Biblical story of King David is a puzzle. There is, first, the problems of the Biblical text itself, which welds an old folktale about a shepherd slaying a giant to a realistic-sounding narrative of David's royal career. This narrative makes him out as an ambitious, cold-blooded adulterer who lied, sold out his underlings, and fought with just about everyone, including his own sons. The King David remembered centuries later, the supposed author of the psalms, bears little resemblance to the schemer of the Book of Samuel.

And who wrote the Book of Samuel? It is quite unlike the royal narratives of Assyria and Egypt, which extol their subjects as mighty, always victorious heroes. How did it come to be written, and when? Why was it included in the Bible in this form, so critical of Israel's first king? I have always been left with the impression that it must have a lot of truth in it, because I can't imagine why anyone would have made it up. On the other hand it has many fictional touches, including a glimpse into David's thoughts at a time when he was alone, and other things no chronicler could have known.

And then there is the archaeological puzzle. National Geographic has a nice summary of this hot debate, which I recommend to the curious. If the Book of Samuel is a genuine record of David's time, it implies certain things -- cities, palaces, temples, armies with chariots -- that archaeologists have had trouble verifying. A school of critical archaeology grew up in the 1980s that dismissed the Kingdom of David and Solomon as a fairy tale. As expressed by the current leader of this school, Israeli archaeologist Israel Finkelstein,

Jerusalem was little more than a "hill-country village," David himself a raggedy upstart akin to Pancho Villa, and his legion of followers more like "500 people with sticks in their hands shouting and cursing and spitting"—not the stuff of great armies of chariots described in the text.

Now, though, a new generation of archaeologists is finding signs of greater sophistication in 10th century Judah, including a building in Jerusalem that some think is David's palace and a major copper mine and smelter at Khir­bat en Nahas that might be King Solomon's Mines. Their work in controversial in part because they are supported and funded by proponents of "Greater Israel," who see verifying the Biblical text as support for land claims in the West Bank. My take on this evidence is that it does point to a higher degree of development in Judah than Finkelstein was willing to accept, but that in itself says nothing one way or the other about the historicity of the Book of Samuel.

Reading about this, I ponder what it would be like to be an archaeologist in a place where archaeological findings mattered a lot -- plenty of money, plenty of attention, but everything you say about the past interpreted mainly as a political statement about the present. Ick.

Above, the 9th-century grave stela discovered in 1993 that mentions the House of David, the first extra-Biblical confirmation of David's existence; below, the site of Khirbet Qeiyafa in the Elah Valley, which may date to David's time in the 10th century BC. 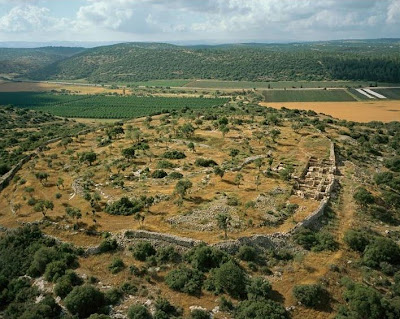