The Bones of El Sidrón 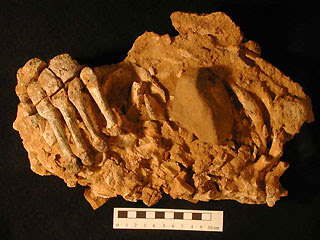 I cringe almost every time I read something about Neanderthal social structure or family life. With next to no evidence, anthropologists desperate to say something about the Neanderthals have launched many flimsy speculations and gone out on all sorts of absurd limbs. Now, in the Spanish cave known as El Sidrón, evidence has finally been found that may really tell us something about our close Neanderthal relatives. Carl Zimmer in the NY Times:

Deep in a cave in the forests of northern Spain are the remains of a gruesome massacre. . . . Scientists have found 1,800 more Neanderthal bone fragments in the cave, some of which have yielded snippets of DNA.

But the mystery has lingered on for 16 years. What happened to the El Sidrón victims? In a paper this week in The Proceedings of the National Academy of Sciences, Spanish scientists who analyzed the bones and DNA report the gruesome answer. The victims were a dozen members of an extended family, slaughtered by cannibals.

The evidence of cannibalism is convincing; the bones have cut marks and marks of human teeth, the long bones have been split open, and the whole assemblage looks exactly like the archaeological remains of a messy feast. Bones from other sites add to the case that Neanderthals were cannibals, and this has generally been accepted for some years.

The new data from El Sidrón comes from genetic testing:

After spending years on these anatomical jigsaw puzzles, Dr. Lalueza-Fox and his colleagues could identify 12 individuals. The shape of the bones allowed the scientists to estimate their age and sex. The bones belonged to three men, three women, three teenage boys and three children, including one infant.

Once the scientists knew who they were dealing with, they looked for DNA in the bones. The cold, damp darkness of El Sidrón has made it an excellent storehouse for ancient DNA. Dr. Lalueza-Fox and his colleagues have published a string of intriguing reports on their DNA. In two individuals, for example, they found a gene variant that may have given them red hair. They launched an ambitious project to find DNA in the teeth of all 12 individuals. In one test, they were able to identify a Y chromosome in four. The scientists had already identified all four of them as males — the three men and one teenage boy — based on their bones.

The scientists then hunted for mitochondrial DNA, which is passed from mothers to their children. They looked for two short stretches in particular, called HVR1 and HVR2, that are especially prone to mutate from generation to generation. All 12 Neanderthals yielded HVR1 and HVR2. The scientists found that seven of them belonged to the same mitochondrial lineage, four to a second, and one to a third.

Dr. Lalueza-Fox argues that the Neanderthals must have been closely related. “If you go to the street and sample 12 individuals at random, there’s no way you’re going to find seven out of 12 with the same mitochondrial lineage,” he said. “But if you go to the birthday party for a grandmother, chances are you’ll find brothers and sisters and first cousins. You’d easily find seven with the same mitochondrial lineage.”

If these people were killed and eaten together, they presumably lived together. And thus, thanks to their love of human flesh, we finally have a picture of a Neanderthal community: an extended family of closely related men who had brought in some women (wives?) from outside the clan.
Posted by John at 5:38 PM