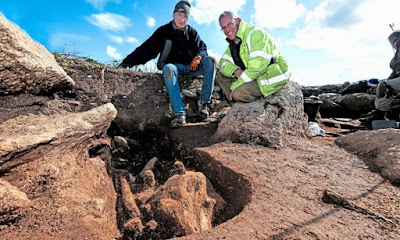 Archaeologists working at a 14th-century hermitage on the island of Guernsey were startled to find a porpoise skeleton in a feature that looked at first like a human grave.

They told reporters that they had never seen anything like it, but that's just because they're not sufficiently up on the weird side notes of British archaeology. 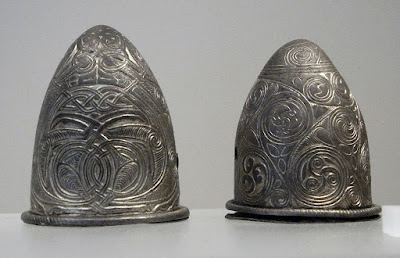 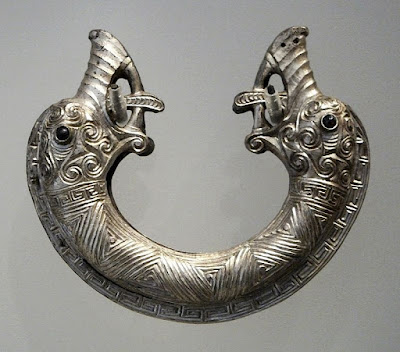 Porpoise bones have been found buried in several British sites dating to between the Neolithic and the late Middle Ages. The most famous example is on St. Ninian's Isle in the Shetlands, where a porpoise jaw was found in the so-called St. Ninian's Treasure unearthed in 1958; some of the silver pieces from this treasure are above.

Dolphins and porpoises are surrounded by folklore all around Europe and were especially associated with luck. A common superstition held that to harm a porpoise who followed a ship would bring luck of the worst kind; but the belief has also been recorded that a porpoises head hung from the mast would bring good luck. Porpoise blood and bones were used in medicinal and magical concoctions across Europe and especially among the Vikings, who held that porpoise blood might give great wisdom. Coastal people sometimes treated beached whales, including porpoises, as a sort of manna from heaven, sent directly by the sea gods to hungry people. 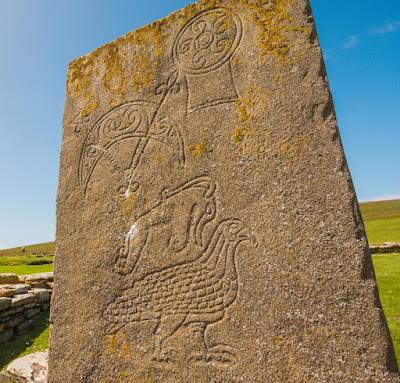 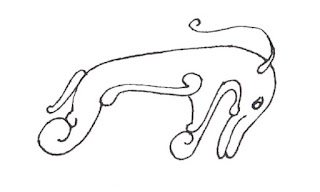 On several Pictish Symbol stones is carved a beast whose interpretation is much disputed. But some think it represents a beaked whale.

The people of Guernsey and the Shetlands were seafaring folk, so porpoises were part of their lives, including their spiritual lives. I for one don't find a buried porpoise surprising in the least.
Posted by John at 8:22 PM