Catastrophe vs. Ingenuity in the Cacao Groves 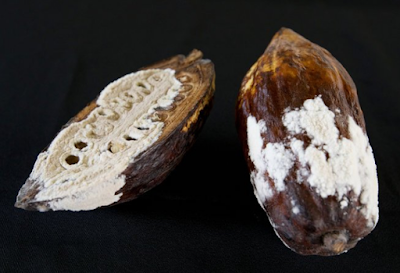 In the 1970s, Costa Rica was the world's leading producer of cacao. Then a fungus known as frosty rot spread like wildfire through the groves, and by 1983 production had fallen 96 percent. In the short term production shifted to west Africa, which still dominates the world in this area. But the danger has always been hanging out there that the fungus might spread – or if not frosty rot, then one of the other fungi or viruses that bedevil cacao – and chocolate would suddenly become a rare luxury good. I remember reading an apocalyptic magazine story about this a decade or so ago.

The reason cacao and our other crops are so vulnerable to disease is that we tend to grow a few high-yielding varieties that are genetically identical – in the case of cacao most trees in the world are clones of a few high-yielding trees selected in the 1940s, spread by cuttings. Fortunately for us there are still wild cacao trees and also many surviving older varieties that can be used to breed new trees. Which is what they are doing at Costa Rica's Cacao Genetic Improvement Program, which raises 1,235 different types of cacao tree:


In the early 1980s, Dr. Phillips-Mora worked to identify the most naturally tolerant and productive cacao trees, then painstakingly hybridized the candidates to create novel varieties.

Breeding hybrid cacao clones is a lengthy process, and experts worldwide have largely failed in this endeavor. But in 2006, Dr. Phillips-Mora released his first batch of hybrid cacao varieties.

In terms of disease resistance and yield, the differences were astonishing. Dr. Phillips-Mora’s six hybrids produce on average about three times more cacao than standard varieties; under ideal conditions, the most prolific hybrids can produce six times more cacao.

Not only that, but the chocolate tastes good. So while there is always a danger that a fast-spreading disease might devastate one of our major global crops, we are also very clever about breeding or engineering resistant strains.
Posted by John at 8:24 AM

We've been through basically this exact problem before.

The bananas people at in the 1950s and before are not the same bananas we eat today. The banana industry was devastated when fungus destroyed the "Big Mike" variety of banana that was basically the only one grown commercially, driving it virtually extinct. We ended up replacing it with the "Cavendish" variety. But now the same thing is happening again - a new fungal threat is slowly looming, and will likely wipe out the Cavendish in time, forcing us to switch to yet another new variety.

I wonder if maybe part of the solution is not putting all of eggs in one basket, so to speak. Didn't the Irish Potato famine teach us anything about the need to have genetic diversity in our crops?

Yes, everyone who thinks about the big picture emphasizes that, but it's hard to persuade farmers to grow a variety with a 5% lower yield for the common good. Which is yet another reason we need governments: to set up these institutes where unpopular cultivars can be maintained and used for cross-breeding.