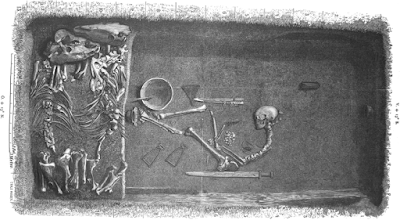 Skeleton Bj581, excavated near the town of Birka, Sweden, in the 1880s, was buried with a full suite of warrior gear:


Prominently placed on an elevated terrace between the town and a hillfort, the grave was in direct contact with Birka's garrison. The grave goods include a sword, an axe, a spear, armour-piercing arrows, a battle knife, two shields, and two horses, one mare and one stallion; thus, the complete equipment of a professional warrior. Furthermore, a full set of gaming pieces indicates knowledge of tactics and strategy, stressing the buried individual's role as a high-ranking officer.

The original excavators thought this was a man. In the 1970s the bones were re-examined, and this analysis concluded that this was a female warrior. For reasons I have explained before, few archaeologists consider such sex determinations to be proof of anything, so there the matter has rested.

But now DNA extracted from the bones has been analyzed, and it also points toward female. The DNA was not perfectly preserved and this is a statistical argument, not a straight reading of the genes, but the evidence is quite strong.

The Birka warrior was a full-grown woman, likely in her thirties. This is interesting because much of our literary evidence of warrior women concerns adolescents, and one theory has been that they later married and assumed a more usual female role in society. Her bones were gracile, so she was likely svelte rather than brutish. Her bones showed no evidence of injuries or disease.

The Birka warrior helps make the case that saga accounts of female warriors are not just stories. On the other hand it is the only such burial yet known – high status, full set of warrior gear, no female grave items, good sex identification – so one should not jump to conclusions about the number of female warriors in the Viking world or their social role on the basis of this one example. With the price of DNA testing continuing to fall fast, we should have a lot more data soon.
Posted by John at 5:44 PM