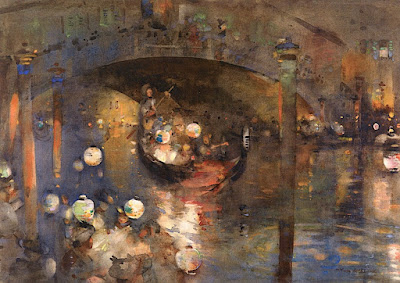 Arthur Melville (1855-1904) was a Scottish watercolor painter known for his unusual use of color and impressionistic style. I was inspired to look him up by this painting, The Music Boat, Venice, which I find delightful. Its date is listed as 1904, so it must have been one of his last works. 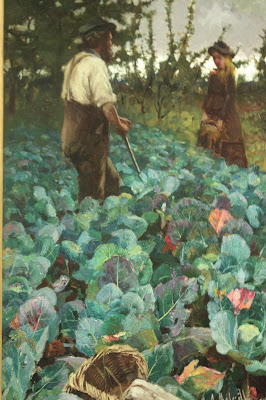 He was born at Loanhead-of-Guthrie in Angus, a real out-of-the way place. I haven't read anything about his family but he must have been born to money, because he studied in Paris and did a lot of traveling before he ever had much success as a painter. This is the first painting he exhibited at the Royal Academy, A Cabbage Garden, 1877. 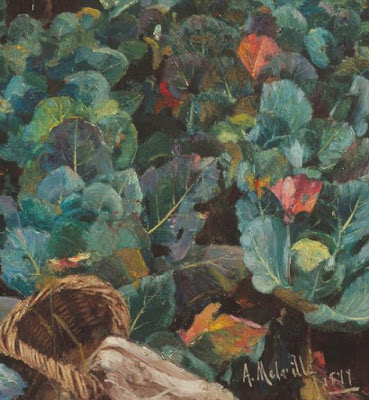 Zooming in on the cabbages you can see the rather wayward treatment of color that was his hallmark. 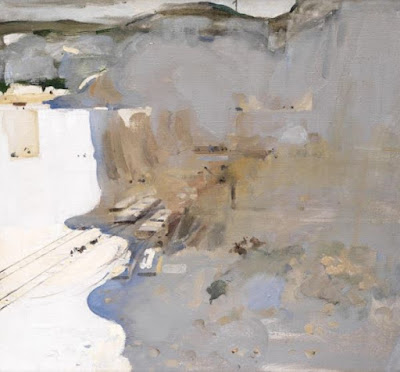 According to what I have read, most of Melville's paintings were of everyday life, and he became associated with a bunch of realists known as the Glasgow Boys who were sort of the Ashcan School of Scotland, that is, they liked to paint things other artists considered beneath them. But this is the only other such painting I have found online, The Chalk Cutting, 1898. 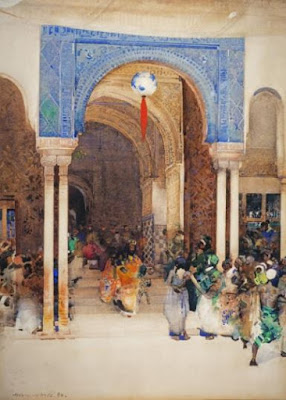 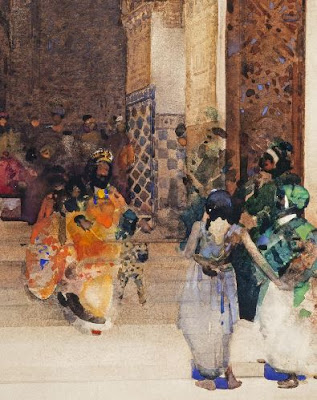 The internet is not much for scenes of everyday life. Or for scenes of golf, which the sources say were a specialty of Melville's. I imagine those hang in golf clubs and the man caves of wealthy players across Britain, but otherwise that is not the taste of this generation. No, we like the showy and the exotic. And as it happens Melville also did a lot of showy, exotic work, so that is what an online search turns up. This is Cophetua and the Beggar Maid, 1898, an old story about a king who disdained all women until he saw one particular beggar maid on the street and fell instantly in love with her. I find it fascinating that these stories were so widely told among people for whom romantic love played a rather small part in society, since all of their marriages were arranged. 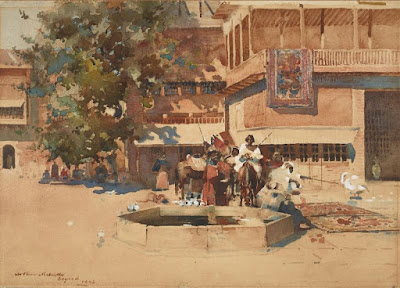 Melville's career as an Orientalist began with a long trip he took to the Middle East in 1881 to 1882. He sailed to Cairo, spent some time in Egypt, and then traveled overland to Baghdad and from Baghdad to Constantinople. He did some paintings outside despite the brutal heat, and he also filled sketch books with ideas that he developed into more paintings back in Scotland. Baghdad, 1883. 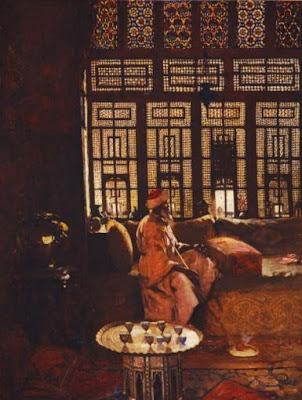 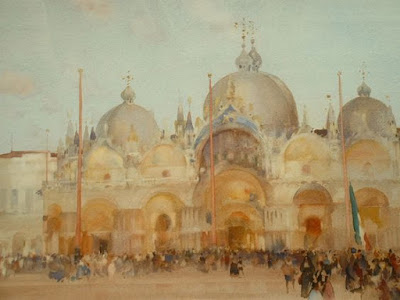 He continued his wandering ways for the rest of his life, spending time in Venice 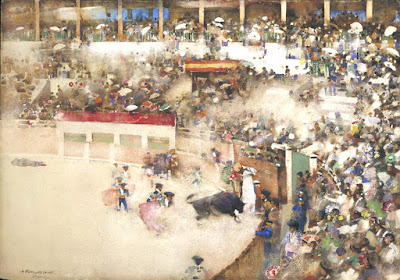 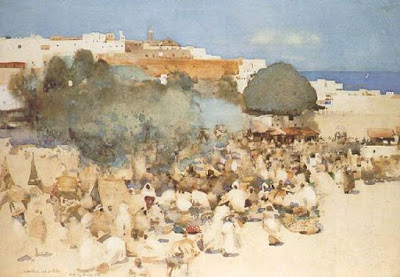 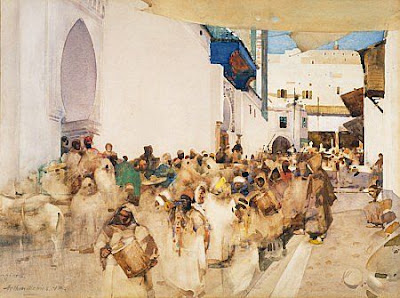 Morocco, and more. Directly above is one of his most famous works, A Moorish Procession in Tangier, 1893. 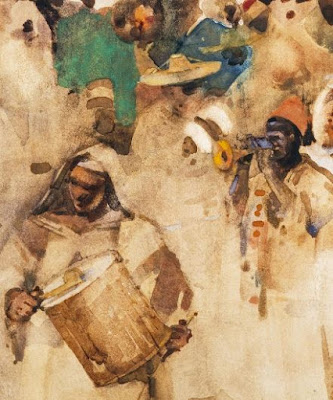 Close-up of faces showing the technique. 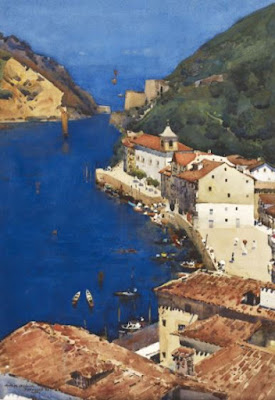 "I find it fascinating that these stories were so widely told among people for whom romantic love played a rather small part in society, since all of their marriages were arranged."

People often fantasize about what they wish they could have. We tell ourselves stories about good triumphing over evil, when frequently it doesn't. We fantasize about a simple orderly world when reality is complex and chaotic. The powerless love to imagine scenarios in which they (or an everyman stand-in) somehow have or acquire great power. The poor and unfortunate revel in tales of riches and success.

The 1800s were full of stories about romantic love, in both hopeful and tragic versions, in large part because there was so little of it to go around in reality. Tropes like finding one's true love, and particularly doing so with a woman of low station, a social pariah such as a beggar or a prostitute who nevertheless was incredibly beautiful or sparked incredible love or passion, resonated for a reason. How many people of that age must have fallen in love, but been denied a chance for that love to be expressed, all because of the restrictions and obligations of society! For all those who felt their own love could never be, they could at least take some small solace in the miraculous romantic fortunes of the heroes in their favorite stories.

Well, yes, the worldwide persistence of the fantasy is actually what fascinates me. Love at first sight is a universal idea, or nearly so. Everyone knows what it means. Many people have felt that this is how it should be, and would be in some golden age. The hard reality of marriage negotiations and property transfers, though extremely common, have often been felt false and even wicked; think how many tragedies turn on true love frustrated by cynical elders.

Here is another way that we have become more free than our ancestors. We can now, most of us, marry whom we love, rather than settling for something arranged by our parents. And, again, the reality of this freedom is rather less wonderful than the way it is portrayed in fairy tales.