The Changing Meaning of American Unity

The National Cathedral is removing its windows that honor Robert E. Lee and Stonewall Jackson, which were installed in 1953:


The Chapter believes that these windows are not only inconsistent with our current mission to serve as a house of prayer for all people, but also a barrier to our important work on racial justice and racial reconciliation. Their association with racial oppression, human subjugation and white supremacy does not belong in the sacred fabric of this Cathedral. 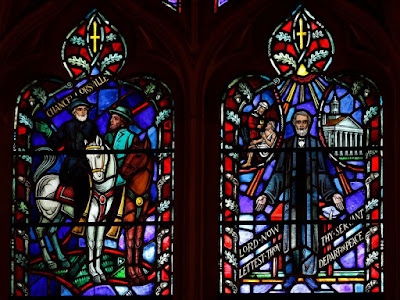 I find this interesting because the cathedral has always considered itself a symbol of American unity, a “spiritual home for the nation.” As late as 1953 that meant bringing North and South together by allowing a prominent place to Confederate heroes. It does not seem to mean that any more.
Posted by John at 7:34 PM

In 1953, it was far easier to view Confederate figures as simply having been the people who just so happened to be on the other side of a civil war, rather than as paragons of racial injustice.

Why? Because in 1953, racial injustice was the accepted norm, even among those who championed the cause of the Union. In 1953, the country was still racially segregated, and very little thought was given to that fact.

In 1953, the Civil Rights movement had yet to take off. It would be another year until Brown v. Board of Education. It was two years before Rosa Parks protested segregated buses. It wasn't until 1957 that the Little Rock Nine were desegregated and given escort by the National Guard. It would be over a decade before the Civil Rights Act of 1964. Et cetera, et cetera.

People had other things to worry about in 1953. The Korean War was ending, and relations with China and the USSR were very bad. The Russians had just developed thermonuclear weapons, and the Rosenbergs were executed. Television had recently made the jump to a nationwide phoneomenon, and the first color television was sold. So many things were happening, so much was changing, and people simply didn't have much time to think or care about racial injustice except as just another part of "ordinary life".

The simple fact is that in 1953, most Americans still esteemed even the worst of white people above the best of black people. Confederates might have been traitors to the Union, but they were at least still white.

The so-called "American Unity" of the age didn't concern itself with including African Americans. It was about whites uniting with other whites, while the blacks remained second rate citizens at best.