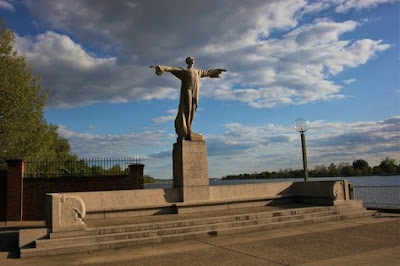 I've spent a fair portion of my career woking along Washington, DC's river fronts, and I thought I knew them pretty well. But when I asked for obscure monuments to feature in that post, a friend called my attention to the city's Titanic Memorial. 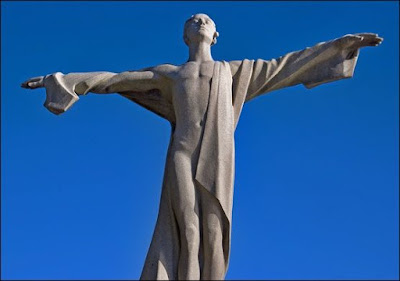 The monument is dedicated


To the brave men who perished in the wreck of the Titanic - April 15 1912. They gave their lives that women and children might be saved.

Some of the wealthy women who survived the disaster organized a competition for a monument to their lost men in 1914, entries limited to women, and the winning design was submitted by Gertrude Vanderbilt Whitney. She was an accomplished artist who was also a Vanderbilt married to a Whitney — that must have been some wedding. But it took until 1934 to raise the funds and build and install the memorial. It was originally in a prominent location at the west end of the Mall, just north of the Lincoln Memorial, but it was moved in 1966 to make way for the Kennedy Center. It now resides where the Southwest Waterfront meets Fort McNair.

You may perhaps have heard that the sacrifice of upper class men on the Titanic was not really so noble, and that they put themselves on the boat before lower class women. To disabuse you of such cynicism, here are the numbers. Only 706 passengers survived and 1,517 perished; most of the crew who survived were the ones who had to be in the lifeboats to operate them. So most of the men on the ships did die. By contrast almost all the children in first and second class survived, and most of the women. The small total for first class male survivors was inflated by a couple of gentlemen who held out until the last minute but then jumped into lifeboats as they were being lowered, figuring that if there was space (and there was; more than a hundred spaces in the lifeboats were not used in the chaos) they might as well take it. The survival rate for all the people in steerage was low partly because they were in the bottom of the rapidly sinking ship and some just did not make it; but then again that may be because nobody tried very hard to get them out. Anyway it is simply true that very few men tried to board the lifeboats until all the women on the deck had been accommodated.
Posted by John at 8:27 AM