How Dinosaurs Lost their Teeth 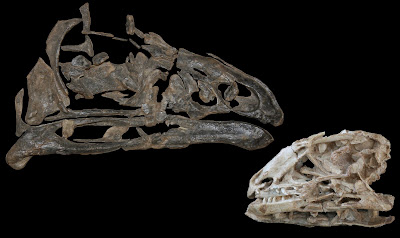 For me the big obstacle to imaging birds as dinosaurs has always been teeth: dinosaurs had them, birds don't. But this is another part of paleontology that is more complex than the simple version, because most early birds had teeth and some non-bird dinosaurs had beaks. And now there is some good new science about how the transition took place:


Using fossils and a large comparative analysis of modern animals, Dr. Balanoff and a team of evolutionary biologists, led by Shuo Wang from the Capital Normal University in Beijing, found that the loss of teeth and the emergence of beaks are connected processes in theropods. As the beak grew across the dinosaur’s face, it also inhibited the growth of teeth, the team suggested. On an evolutionary scale this transition happened until theropods developed mouths that resembled the bird beaks seen today.

In earlier research, Dr. Wang’s team discovered an emu-like theropod called Limusaurus that began life as a baby with teeth, but lost them as it grew older and morphed into an adult with a beak. [above]

For their most recent paper, he and his colleagues examined more dinosaur jaw fossils and found two other theropods that underwent transitions similar to Limusaurus: an early Cretaceous bird called Sapeornis, which resembled modern birds, and a small caenagnathid oviraptorosaur, which resembled a velociraptor but with a beak.

“This demonstrates an evolutionary process of the beak for the first time,” said Dr. Wang. 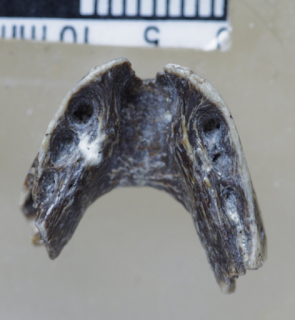 All three of these dinosaurs had beaks with vestigial tooth sockets, as in the Sapeornis jaw above. 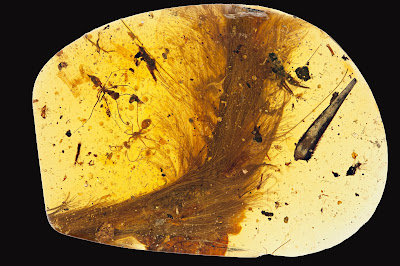 When paleontologists look closely at any change in the fossil record that seems like a dramatic break, they find lots of intermediate cases and strange branchings and evidence that the change took place in different ways in different groups and so on: in other words, a disorderly mess. Evolution is like that. Birds once seemed different from dinosaurs in both having feathers and having beaks. Now we know that lots of dinosaurs had feathers, including most if not all theropods, and from fossils in amber and mudstone and we have learned a lot about how many different sorts of feathers they had and begun to understand how they evolved. We are just in the early stages of understanding beaks, but already enough is known to show that they evolved in several different lineages of dinosaurs.
Posted by John at 7:58 AM

"For me the big obstacle to imaging birds as dinosaurs has always been teeth: dinosaurs had them, birds don't."

Consider another example of lost body features. Our ape ancestors had tails, but we and other modern hominoids lack them. And yet, I would easily assume that fact isn't an obstacle to you imagining our evolution from tailed apes.