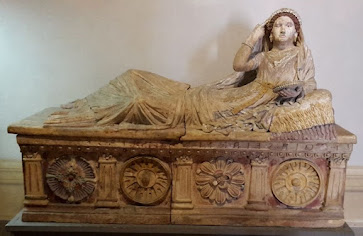 Ancient Greek and Roman writers wondered about the origin of the Etruscans. They spoke a language nothing like the Indo-European tongues of their neighbors, and their religious tradition was also quite different. Some thought the Etruscans were native to Italy, others that they had emigrated from Anatolia – presumably because there were several non-Indo-European languages spoken there. Of course some writers connected this to the Trojan War, because the Greeks liked to connect everything with the Trojan War.

Now there is paleogenetic data that bears on the question:

The origin, development, and legacy of the enigmatic Etruscan civilization from the central region of the Italian peninsula known as Etruria have been debated for centuries. Here we report a genomic time transect of 82 individuals spanning almost two millennia (800 BCE to 1000 CE) across Etruria and southern Italy. During the Iron Age, we detect a component of Indo-European–associated steppe ancestry and the lack of recent Anatolian-related admixture among the putative non–Indo-European–speaking Etruscans. Despite comprising diverse individuals of central European, northern African, and Near Eastern ancestry, the local gene pool is largely maintained across the first millennium BCE. This drastically changes during the Roman Imperial period where we report an abrupt population-wide shift to ~50% admixture with eastern Mediterranean ancestry. Last, we identify northern European components appearing in central Italy during the Early Middle Ages, which thus formed the genetic landscape of present-day Italian populations.

Of the 48 people who lived BC, 40 were perfectly standard western Mediterranean types. So the Anatolian migration theory is out. They had a bit of steppes ancestry, so they were not isolated from the Indo-European invasion that changed the other languages of the peninsula, but for whatever reason they kept their old language while others did not.

More striking is the evidence of major immigration from the eastern Mediterranean during the Roman Empire. This was also true at Rome, but not nearly to this extent; I have to think that this is a sampling problem, and that immigrants did not really make up half the Tuscan population.

And, again as at Rome, there is clear evidence of invaders from the north (Ostrogoths, Lombards, Franks) during the early Middle Ages.

I am just loving that I can experience all this genetic data coming in to answer age-old questions.