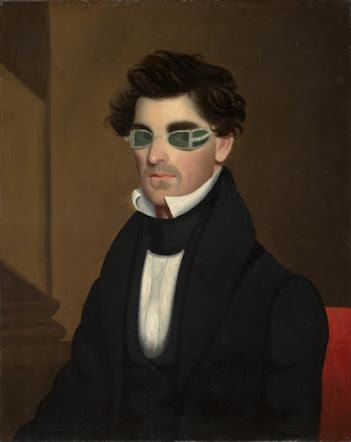 Jeptha Homer Wade, Portrait of Nathaniel Olds, 1837. The glasses
were a fad among people who thought the new whale oil lamps
were so bright they caused eye damage.

Scott Siskind inquires into semi-heavy water. Real heavy water, enriched with deuterium, will kill you over time, and there is actually some evidence that even the ordinary amount of deuterium is bad for you.

Six-minute film shot on the streets of New York in 1911. Colorized, but in a way that I find enriching rather than distracting. Love the way people are dressed.

Havana syndrome and microwave attacks. I still say it's hysteria.

John McWhorter says the best way to get from basic language knowledge to real understanding is a program called Glossika (NY Times). Tempted to do this for German to get my fluency back.

New archaeological finds from Sanxingdui in China, weird and fascinating. And a post featuring one spectacular artifact, a bronze tree.

Impressive gold hoard from Denmark, dating to the 6th century AD. There is a theory that a lot of sacrificial offerings were made after the volcanic eruption of 535 darkened the skies and led to three years of cold weather, and this might be one of them.

One simple way to increase the value of your home is to build an impressive entrance. (NY Times)

Between 1830 and 1862, thousands of slaves from Florida and elsewhere in the US escaped across the "saltwater road" to the Bahamas.

Vox review of a new reality show about one of TikTok's first celebrities, mainly about the ambiguity of fame and fortune. My take away was, however bad fame and fortune feel, these people still prefer them to the alternative.

Tom Friedman says that during the twenty years we spent trying to make the Middle East more like America – democratic, pluralistic – we have instead become more like the Middle East – tribal, factionalized, unable to work together toward common national aims. (NY Times)

Using ancient DNA to study inbreeding: after analyzing 1785 genomes from around the world, these authors find that second cousin or closer marriage was not common in any period, except on certain islands, and that the rate of inbreeding has generally declined over time. If true, this is a fascinating finding, since we know the stated norms of many historical societies promoted cross-cousin marriage.

"If true, this is a fascinating finding, since we know the stated norms of many historical societies promoted cross-cousin marriage."

Well, that raises the question - are the genes being studied those of the common people, or those of the aristocracy, and in particular royal families?

The stated norms of historical societies are overwhelmingly biased toward the view of the rulers and the elites, not the view of the average person. And the idea of "pure bloodlines", and the willingness to marry more closely, would have been far more important among the top echelons of society, as they justified their power and status on the basis of "better breeding".

@G- you're right, such norms often describe mainly elite behavior, and that could explain much of this. On the other hand archaeologists suspect that our sample of ancient bodies is biased toward the elite, who were more likely to be buried in deep shafts or stone tombs that protect the body or mummified or whatever.

In the opening scene in the 1911 film, NYC, the suits all fit like the are tailored to the individual bodies, and maybe back then they were. They certainly fit and look better than what I see today. Hey, in 1911 NYC was a very well-dressed city.