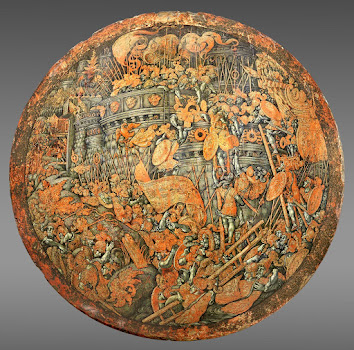 This spectacular shield was made around 1535 by Girolamo di Tommaso da Treviso. It depicts the Romans under Scipio Africanus capturing Cartagena in Spain during the Second Punic War. The design is based on an earlier French tapestry and was probably chosen to honor Emperor Charles V, who had recently captured Tunis from the Turks. 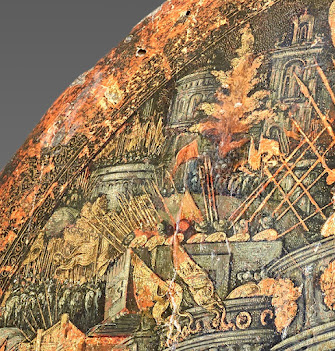 The shield seems to have been passed around between various Italian noble families for the next 200 years. In the early 1700s it was acquired by a certain Tommaso, the last marquess degli Obizzi, and kept in the Castello del Catajo outside Padua, part of his vast collection of arms and armor. When he died, all of his lands and property passed to the House of Este, long the rulers of Ferrara. 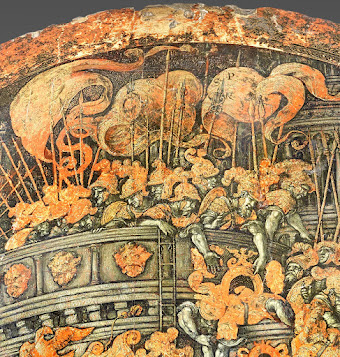 The Estes had a very long run as a prominent noble family, more than 600 years, but eventually their last heiress (Maria Beatrice Este) married a Hapsburg, Archduke Ferdinand of Austria, and all of their land and property was absorbed into the Austrian royal family. 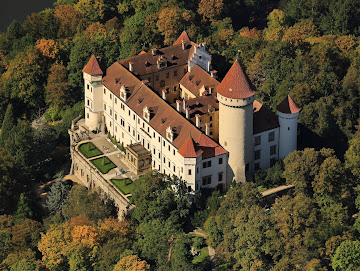 Using the Este fortune, the Archduke built Konopiště Castle in Bohemia into a fabulous Baroque showplace. The shield traveled there and became part of the castle collection. The castle declined in the nineteenth century and was in bad shape by 1889 when a certain Archduke Franz Ferdinand of Austria purchased it. He went on to be assassinated, thus sparking World War I. After the war Konopiště Castle was in Czechoslovakia. 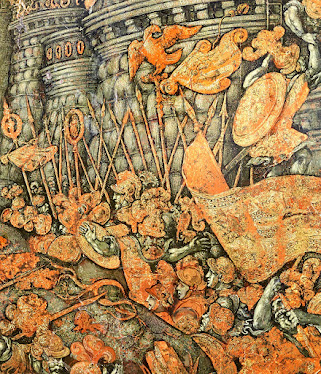 In World War II the Nazis came and expropriated everything in the castle–among the many things they hated, the Hapsburg family figured prominently–and it ended up in Vienna, where it was slated to bec displayed in grand museum celebrating Hitler's victories. In 1945 the US Army's art recovery team (the "Monuments Men") seized it, and it ended up in the Philadelphia Museum. Whence it has just now been returned to Czechoslovakia, part of a long process by which objects in that US Army collection have been slowly returned to the people and places form which they were looted. 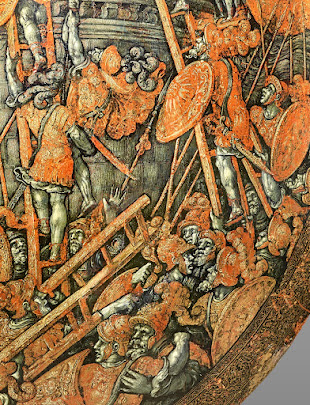 Via The History Blog, which has a 20 megabyte image of the shield.