The Footprints of White Sands 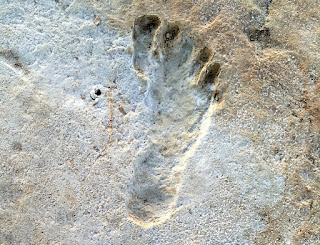 Big archaeological news this week: the announcement that the human footprints uncovered at White Sands, New Mexico date to as much as 26,000 years ago (NY Times; BBC). The footprints are very cool however old they turn out to be:

The footprints were first discovered in 2009 by David Bustos, the park’s resource program manager. Over the years, he has brought in an international team of scientists to help make sense of the finds.

Together, they have found thousands of human footprints across 80,000 acres of the park. One path was made by someone walking in a straight line for a mile and a half. Another shows a mother setting her baby down on the ground. Other tracks were made by children.

“The children tend to be more energetic,” said Sally Reynolds, a paleontologist at Bournemouth University in England and a co-author of the new study. “They’re a lot more playful, jumping up and down.”

Mathew Stewart, a zooarchaeologist at the Max Planck Institute for Chemical Ecology in Jena, Germany, who was not involved in the study, said that the evidence that humans had left the footprints was “unequivocal.”

The footprints were formed when people strode over damp, sandy ground on the margin of a lake. Later, sediments gently filled in the prints, and the ground hardened. But subsequent erosion resurfaced the prints. In some cases, the impressions are only visible when the ground is unusually wet or dry — otherwise they are invisible to the naked eye. But ground-penetrating radar can reveal their three-dimensional structure, including the heels and toes.

Mammoths, dire wolves, camels and other animals left footprints as well. One set of prints showed a giant sloth avoiding a group of people, demonstrating that they were in close company.

The footprints were dated by deposits of ditch grass seeds interbedded with the sand layers. The dating seems pretty good, but this is a weird ecosystem and a weird soil configuration, so I think a lot more work will be thrown at figuring all this out.

There are two sides to the debate about when humans reached the Americas because there is strong evidence on both sides. On the one hand, the White Sands footprints are just the latest in a long line of archaeological sites dating to more than 14,000 years ago. On the other there is the undeniably evidence for the explosive spread of the Clovis people around 13,000 years ago, which is hard to explain unless the continent was empty of people. Modern genetic studies suggest that almost all Native Americans descend from a single founder population that lived on the order of 15,000 years ago. Other evidence, such as extinctions and fire frequency, also points to the Clovis period as the first when there were appreciable numbers of people around.

So the debate will go on. And meanwhile please ignore all the stories that say the 'Clovis first' theory is some kind of old-fashioned archaeological consensus that this new evidence overturns, because it has never been accepted by all American archaeologists and for the past 30 years it has been a minority view.

“They’re a lot more playful, jumping up and down.”

Maybe they had ants in their fig leafs.