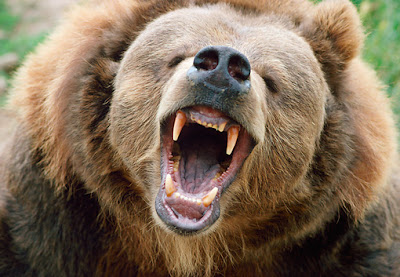 Linguists have a term, "taboo deformation," for words people use instead of the proper one when the thing to be named is best left unmentioned:


A great example of this is the word “bear,” in English. “Bear” is not the true name of the bear. That name, which I am free to use because the only bear near where I live is the decidedly unthreatening American black bear, is h₂ŕ̥tḱos. Or at least it was in Proto-Indo-European, the hypothesized base language for languages including English, French, Hindi, and Russian. The bear, along with the wolf, was the scariest and most dangerous animal in the northern areas where Proto-Indo-European was spoken. “Because bears were so bad, you didn’t want to talk about them directly, so you referred to them in an oblique way,” says linguist Andrew Byrd.

H₂ŕ̥tḱos, which is pronounced with a lot of guttural noises, became the basis for a bunch of other words. “Arctic,” for example, which probably means something like “land of the bear.” Same with Arthur, a name probably constructed to snag some of the bear’s power. But in Germanic languages, the bear is called…bear. Or something similar. (In German, it’s Bär.) The predominant theory is that this name came from a simple description, meaning “the brown one.”

In Slavic languages, the descriptions got even better: the Russian word for bear is medved, which means “honey eater.” These names weren’t done to be cute; they were created out of fear.

It’s worth noting that not everyone was that scared of bears. Some languages allowed the true name of the bear to evolve in a normal fashion with minor changes; the Greek name was arktos, the Latin ursos. Still the true name. Today in French, it’s ours, and in Spanish it’s oso. The bear simply wasn’t that big of a threat in the warmer climes of Romance language speakers, so they didn’t bother being scared of its true name.

In portuguese, "urso". And "ursinho" is a quite gentle and loving word.

The only feared bear nowadays is the Arctic (!) bear, does that mean the bear bear or the arctic arctic ? Polar bear, I mean. But even those are under tender "protection" from animal lovers.

The European bear was probably not the most frightening creature.