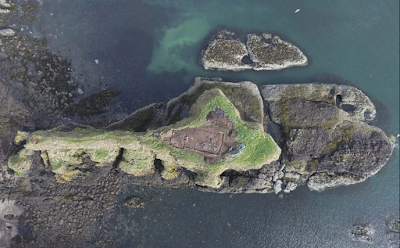 Behold Dunnicaer, a "sea stack" off the northeast coast of Scotland. 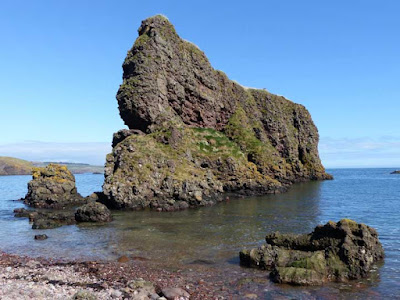 This rock is an island at high tide, and getting up is not so easy even when it is attached to the land, because of the 100-foot-high cliffs (30 m). 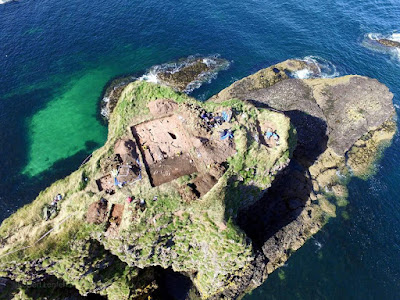 Recently some archaeologists from the University of Aberdeen have been digging on top, which required the services of experienced mountaineers to get them and their gear up the cliffs. 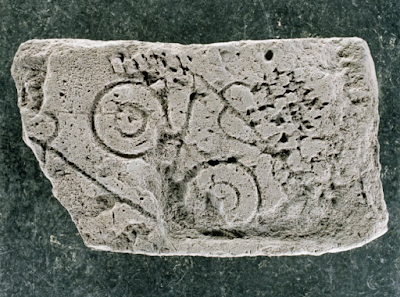 The place has long been rumored to be an ancient fortress of the Picts, for two reasons. First, in 1832 some local lads climbed up on top, or said they did, and came back with six Pictish symbol stones. 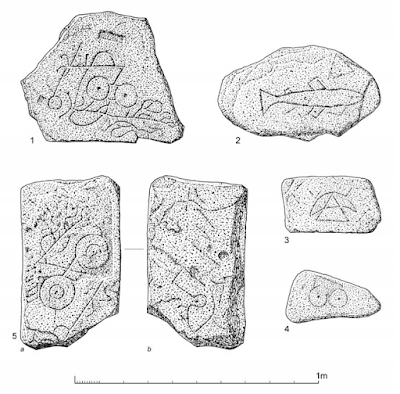 Nineteenth-century drawing of the stones. 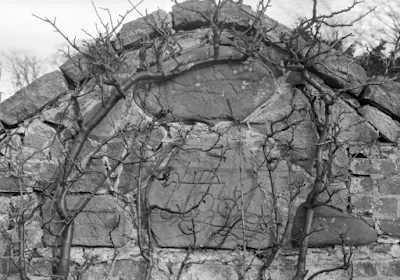 In 1862 the stones were acquired by a local grandee who had them built into his garden at Banchory House, where five of them still remain; these four overlook the tennis court. 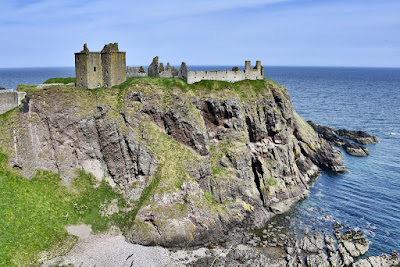 Second, a place called Dun Foither appears in the Pictish Annals, which mention that it was besieged by other Picts in 681 and 694 AD. Since the Pictish Dun Foither could easily become Dunnicaer in Scottish, the places might well be the same. But there is a complication, a medieval fortress just a few miles away called Dunnotar Castle. Since Dunnotar is also a plausible Scottish rendering of Dun Foither, some scholars have maintained that it is the place mentioned in the Annals. 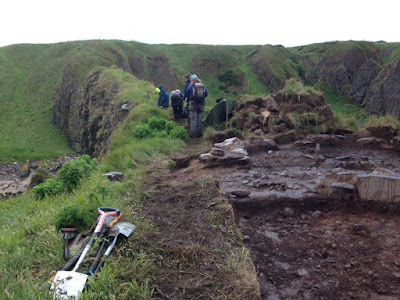 But excavations at Dunnotar have failed to produce any evidence of Pictish presence, and Dunnicaer was on top of that inaccessible rock, so the question remained unresolved. But with help from climbing rope and helpful guides, archaeology at Dunnicaer has made great progress. The leaders of the current excavations have just announced that the site was a fortress in Pictish times, radiocarbon dated to between 200 and 400 AD. The excavators think it may have served as a pirate base for raiding Roman Britain. The level area on top of the rock measures only 40 by 65 feet (12x20m), and the site had walls made of a timber frame filled with stone, so this would not have been a very roomy residence. 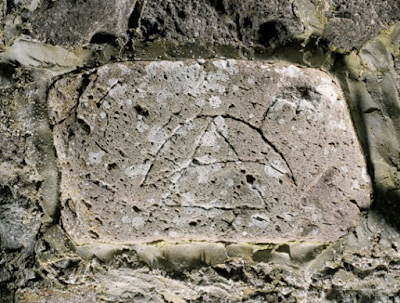 Much of press surrounding the current excavation has to do with the excavators' theories about the symbol stones:


"In the last few decades, there has been a growing consensus that the symbols on these stones are an early form of language," Gordon Noble, head of archaeology at the University of Aberdeen in the United Kingdom and the senior author of the Antiquity paper, said in a statement.

However, until now, it's been unclear when or how this language developed, with some scholars believing it was invented during the Middle Ages, after the Romans left Britain. . . . 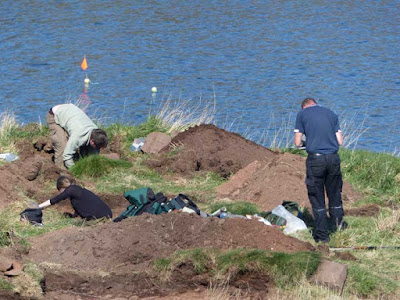 But Dunnicaer, which has produced six symbol stones, dates to Roman times, so that seems to rule out a medieval origin for the system.


Based on their research, the scientists concluded that the Pictish language was likely developed in the third or fourth century A.D., and it may have been inspired, to a degree, by the Romans, who also used a writing system at the time. However, rather than using Latin (the language of the Romans), the Picts developed a writing style that was quite different from that language, the scientists noted in their study.

The scientists also noted that around the time that the Picts developed their language, a writing system known today as Runes was developed in Scandinavia and parts of Germany. Another system, known as Ogham, emerged in Ireland. . . .

"As with Runes and Ogham, the Pictish symbols were also probably created beyond the frontier in response to Roman literacy," the researchers wrote.

Which is interesting, but I am still not convinced that the Pictish symbols are a written language at all, because of the lack of repeating phrases. Writing on monuments tends to be full of stock phrases like "X lord of Y" or "A son of B", the sort of thing that has allowed linguists to decipher a few words of Etruscan. But the symbol stones have no such repeated phraseology. If they are writing, they are a different kind of writing than any other system known in Europe. If there is a "consensus," I am not part of it. 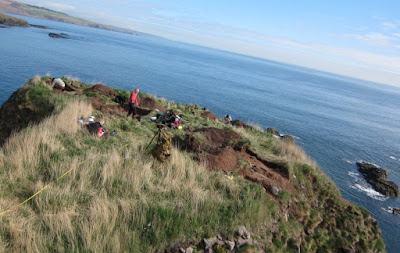 But I do like the attempt to understand the symbol stones by comparing them to the other European writing systems that appeared around the same time. And how delightful to imagine a Pictish lord and his people living on this rock, crammed together for safety in a very snug little fort, dreaming of Roman riches and fearing Roman reprisals or the attacks of their own jealous kinsmen.
Posted by John at 9:00 PM