American Politics in One Graph 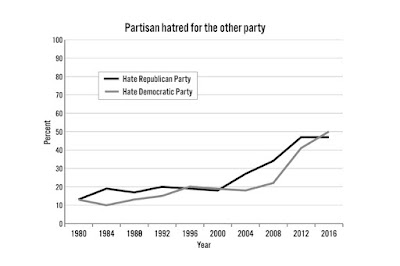 All you need to know is right here. Via Jonathan Haidt.
Posted by John at 9:54 AM

Interesting - my fb friends tend to say that Dems' hatred for republicans was a reaction and the polarization was started by republicans hatred for Obama, but from this graph it seems taht actually Dems started hating earlier and Republicans actually lagged by some six years...

Given that I'm pretty firmly liberal, I can understand the grievances many liberals have about conservatives - chiefly in areas of race, sex, religion, social justice, et cetera.

Pretty much all of the angry democrats I know feel hatred toward Republicans because they view Republican behavior as immoral and monstrous - with the policies that Republicans pursue seeming to promote bigotry and injustice, and to demonstrably do harm to women, minorities, and nonconformists. The feeling is that conservatives are cruel and uncaring, and pursue their interests at the expense of innocent people.

But trying to turn the tables, and understand the anger from the opposite of the divide... I confess, I struggle. Overwhelmingly it feels like the major conservative motivations are fundamentally selfish and hypocritical.

They want the freedom to persecute Muslims and other religious minorities, but want majority Christianity to receive every protection and privilege imaginable. They want to close our borders and heavily restrict immigration, when they themselves are descendants of immigrants who were allowed free, unfettered entry. They want to deprive certain people of the ability to marry, while reserving that right only for themselves. They engage in blatant corruption and undermine democracy through voter suppression and gerrymandering, then complain that they are losing their political voices as minority populations grow. Et cetera, et cetera, et cetera.

The only source of anger I can fathom for such people is the frustration of not getting their own way at the expense of other people. They don't seem to care one iota about anyone other than themselves. Every position they take seems to be predicated entirely on the question of how much can they personally benefit.

For example, conservatives aren't against abortion for their own sake - if they feel strongly about it, they can just abstain from it in their own lives. But that's not enough for them. They won't admit it, but what they actually care about is enforcing conformity, and depriving people of the freedom to choose for themselves.

Of course, they will openly claim it's not at all about conformity, they just firmly people shouldn't have the freedom to choose, in order to save human lives.

But then you turn the tables around and argue that gun controls needs to be introduced in order to save human lives, and suddenly they switch stances entirely. We can't deny people their freedoms, after all! If our children have to live in constant fear that they might die in a school shooting, so be it! You simply can't take away a person's right to own an assault rifle! That right is more sacred than life itself!

Well, which is it, conservatives? Is "right to life" truly paramount in your worldview? Or is personal freedom more worthy of protection?

It's also telling just how passionately conservatives claim to care about unborn children, but just how little they demonstrate any care for those that have already been born. They steadfastly oppose programs to benefit children at nearly every turn. Why is it they want to ensure fetuses survive till birth at any cost, but after that they're perfectly happy letting children without food, medicine, daycare, et cetera? Unless it was never about the wellbeing of the child, and all that ever mattered was exerting control over the mother?

Well, I am conservative, so I must say in my case the thing is that liberals seem to be deaf. You can talk to them what you really think and want, and after you will finish, they will nod and say "no, what you really think and want is..." and then saying something totally untrue. Of course "conservative" in Poland means something different than in USA, but there are many similarities, so let me chime in. Since you, Verloren, were quite unsensitive in your tirade, let me write something similar in style.

Start with abortion: I am actually pro-choice, but (1) my position is rare amongst conservatives and (2) I know many pro-lifers and their arguments, so here is their position: they really _believe_ abortion is a murder. Because of that, they are shocked by liberals argument that "if you do not want to murder children, fine, but let me murder mine" and even more shocked that there are countries which forbid them to articulate their beliefs (i.e. in Germany there was recently a case when a guy was forbidden to say abortion is murder). Compare "you think slaves are human? Fine, then free your slaves, but do not force me to follow your beliefs!"

They say also that how liberals can claim they care about children, when they are happy with murdering them, and suspect it's not about the children, it's about the liberals' wanting the state to control the family. It seems like liberals are irresponsible, immoral, care just about fun and would pursue their personal pleasures even if that would cost lifes of innocent people. Adding more insult, seems like liberals are hypocritical because at the same time they preach something different.

Another thing is the liberal inclination to change the meaning of the words. They name "social justice" something which is unjust, they call the most fundamental morality (you must first fulfill your obligations and duties towards people close to you before caring about others) bigotry and so on. They want to control speech and thought on the pretexts which seem to be suspicious, because when they talk about hate speech, they are perfectly fine with things which seem hateful if directed toward things dear to conservatives. They seem to hate the democracy, because they scream whenever election results don't go their way. That hipocrisy seems baffling, and changing the word meaning into something new causes me to think that liberals are lying all the time. They don't really care about immigration, they just want to import more voters for themselves and hurt people they hate (because, after all, immigrants cause wage drop only for the poorest, while the richest and middle class gain). They seem just to want to signal their virtue; I've watched the video about Swedish women who helps immirants to integrate in Sweden, who then said that unfortunately, she will have to leave Sweden because the situation became unbearable to her. When I read american liberals, they don't care about poor, because they are mostly rich and privileged while preaching to the poor white males how privileged the unemployed whites are and how they should be dying faster. They at the same time scream state should not to "look in their beds" and want the state sanction for what they do in private beds.

Another thing they force the policies which hurt the people and deny them the agency; it's never the poor people fault thay they are poor, instead of teaching them personal responsibility, they teach them that somehow world owes them something just because they exist.

About the graph: I've checked the book, and I am confused what the lines represent. Is this "hate republican" party as I initially thought, or "hate in the republican party"?

One thing I agree with you about is the hypocrisy over elections, which is widespread in both parties. "Not my president" is the rallying cry of all partisans. I have long thought that American Democrats and British Labour both ought to listen more to closely to what ordinary voters say, rather than dismissing them as deluded and complaining that the cultural ware were got up by billionaires to distract the masses. Culture matters. That doesn't mean liberal parties should change their positions on things like gay marriage, but I think hard questions like this call for respectful treatment of those who disagree with you, not angry insults, especially when the position you are attacking is one your own party held ten years ago.

My own belief is that, while each side can accuse the other of hypocrisy, changing the meaning of words, and so on, such accusations are not terribly important. The two sides in fact disagree on very fundamental issues, and, to an extent, I think they understand each other pretty well. Many of the most fundamental issues they disagree on are not readily susceptible to compromise. Respectful treatment is difficult to sustain, particularly because each side has a hothead faction, and because each side feels--I think quite correctly--that fundamental principles and ways of being are at stake.

In other words--and God help me--I think each side has good reason to hate the other.

The problem is, how can you have respect for people who advocate things like forcible conversion therapy, or forcible denial of marriage, et cetera?

I can absolutely tolerate and respect conservatives holding themselves to their own chosen standards. If people like fundamentalist Christians want to disapprove of homosexuality, I understand and respect their choice. They have every right to disapprove. But they do NOT have the right to deny other people the same freedoms they themselves enjoy.

If a fundamentalist Christians want to practice conversion therapy on the willing members of their own particular church, that's their business. If they want to refuse to perform marriage rites for homosexuals, that's also their business. If they want to convince themselves that homosexuals are evil and will burn in hell for all eternity, hey - they're entitled to their own beliefs.

But what they are NOT entitled to is freedom to attack or oppress other people for not sharing their beliefs. If the rest of us can tolerate and respect their beliefs and allow them to practice them freely on their own terms, then they need to reciprocate with tolerance and respect for others. If they want to be allowed to choose for themselves what they believe and how they personally live, then others must be given the same freedom.

And that's where I find myself drawing the line. I'm more than happy to live and let live with basically anyone who minds their own business - but that respect and tolerance disappears when people start trying to force their beliefs on others for arbitrary reasons, and attempt to rob others of the freedoms they themselves enjoy.

We can disapprove of each other all we want, and life goes on. Where things break down is when things go beyond simple disapproval, and manifest in oppression.