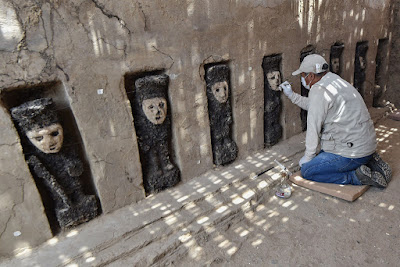 A row of wooden statues, roughly 800 years old, recently uncovered at Chan Chan in northern Peru, the major site of the Chimu Culture:


The statues are 27.5 inches high and made of black wood. They wear beige clay face masks which make for a striking contrast against the darkness of the wood. Each has a circular object on its back that may represent a shield. Of the 20 idols, 19 are intact, one was devoured by termites.

The idols are set in two rows of opposing niches occupying a ceremonial corridor of the Utzh An (the Great Chimu palace). The walls are decorated with high reliefs more than 100 feet long, primarily lines of squares reminiscent of a chessboard. There are also wave patterns and images of the “lunar animal,” a dragonlike quadruped accompanied by lunar symbols which is one of the most ancient recurring figures in Peruvian iconography, first appearing in the early Moche culture. The corridor was discovered in June and was filled with soil. It was excavated over the course of months. The statues were first uncovered in September. 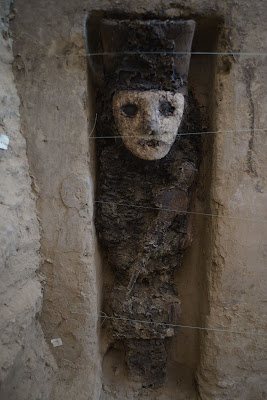 Via The History Blog.
Posted by John at 7:29 AM