Welfare and Work, or, Economics is Stupid 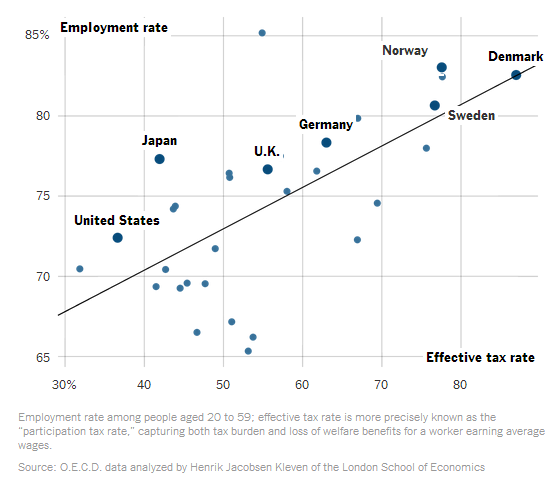 The Economics 101 view of the world, which has people responding in simple ways to the incentives of money and time, does not capture human behavior. There is certainly something to it, but not enough to make it a useful tool for managing a modern economy. Consider the ongoing fall in the number of working age Americans (20-59) who actually work. Republican economists will tell you flat out that this is because our welfare system is too generous, but they are wrong:


It is a simple idea supported by both economic theory and most people’s intuition: If welfare benefits are generous and taxes high, fewer people will work. Why bother being industrious, after all, if you can get a check from the government for sitting around — and if your choice to work means that much of your income will end up in the tax collectors’ coffers? Here’s the rub, though: The idea may be backward.

In Scandinavia, they have much higher taxes than we do, and more generous welfare benefits, but more people are working than in America.

Why might that be? I, of course, have a theory. I think millions of Americans have stopped working because their jobs make them feel like cruelly exploited serfs laboring to enrich a few billionaires. They feel that their employers despise them and would move their jobs to China if they could, and that the whole system is rigged in favor of the owners, to make sure that the workers never get ahead no matter how hard they try.

Work is not just about money. Work is about feeling useful; feeling like you have a slot in the system; feeling appreciated; feeling like you belong to something; feeling like you are somebody. In contemporary America, many people are unable to get jobs that promise any such thing. This is one of the prices of ever-increasing inequality: why bother working when you won't earn as much in your whole life as the fired CEO got in his golden parachute? Why commit yourself to an employer who would let you go at the merest twitch of the revenue graph? If you ask me, Americans are giving up work because the system has become so unfair that it makes no sense for them to participate.

Many of the non-working Americans are on disability. I admit that some of this is a scam, but it is actually not easy to be declared disabled in America (just ask somebody who has tried) and I don't think the scamming amounts to more than a few percent. So why is the number of disabled workers increasing as our jobs get easier and less debilitating? I say because work has become psychologically crushing, not giving back nearly enough in the way of pride, satisfaction, and belonging to make up for the loss in time and labor. I'm not saying that people are consciously opting out; the simple fact is that miserable people are much more likely to get sick than happy people. I think that the ever-rising number of disabled people points, not to something wrong with our welfare system, but to something wrong with out jobs.

In many ways we are headed back to the world of the late 1800s, when they same grotesque inequality dominated the economy. Back then, millions of Americans did not work. The unemployed begged or roamed the country or took occasional odd jobs, living in attics or shacks or dugouts; they seldom married and died young. The percentage of Americans working was another one of those things that peaked in the 1950s, along with the marriage rate and the percentage of workers in unions. So I say that the way to keep Americans working is to bring back as much of that economic world as we can, starting with high taxes on the wealthy and decent wages for workers. In a world as rich as ours, we simply are never going to make unemployment painful enough to force many discouraged people back to work. Instead we should focus on making work worth the effort.

(The "effective tax rate" shown on the graph includes both the taxes you pay out of your income and the benefits you lose when taking a job. It shows that the average Dane who leaves the dole for a job gets only an 15% raise.)
Posted by John at 7:37 AM