Human Diversity and the Paleo Diet

As I keep saying:


Paleoanthropologists are pretty amused by the faddish Paleo Diet. And now a review of studies on hominid evolution is using environmental and chemical evidence to prove that there was no such thing as "clean eating" during the Stone Age. The research, published in The Quarterly Review of Biology, pretty clearly establishes that early humans didn't have any one eating pattern. Instead, diet in the era of early hominids was catch as catch can -- and, of course, regionally specific. While hunter-gatherer groups in northern climates likely ate a diet heavy in animals, reported the researchers, those in more growth-friendly southern climes were probably plant eaters. Very few had what we might call "optimal" diets and instead ate for survival rather than performance. . . .

"Some earlier workers had suggested that the diets of bears and pigs -- which have an omnivorous, eclectic feeding strategy that varies greatly based on local conditions -- share much in common with those of our early ancestors," Sayers continued. "The data tend to support this view."

As a general rule, you should ignore all arguments that begin "Ancient humans did X." Because whether we are talking about diet or marriage patterns or the degree of mobility or just about anything else, you can bet that ancient humans also did Y, Z, Q, L and probably R, S, K, and D too. 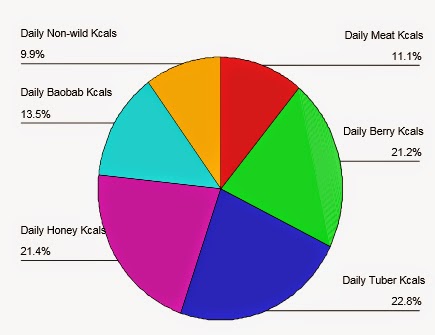 Here's some data on actual African hunter-gatherers, the Hadza of Tanzania. Note that the diet varies a lot from time to time and place to place, and also that these particular people sometimes get more than 20% of their calories from honey and at other times more than 30% from sweet fruit. It's simply bizarre to imagine that our bodies evolved to thrive on meat and greens.
Posted by John at 10:13 AM