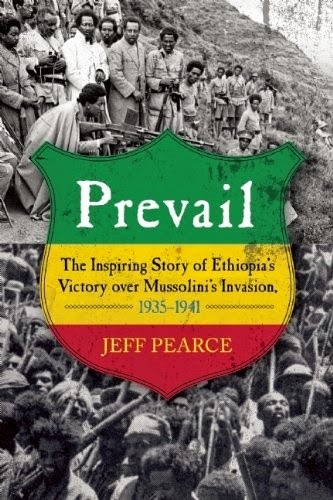 Prevail is a history of the Italian conquest of Ethiopia in 1936, and also of the part that event played in global culture and the diplomatic run-up to World War II. The event is easy enough to describe: Mussolini's fascist regime, seeking military glory and colonial wealth, sent its army into Ethiopia, supported by tanks, modern artillery, and airplanes dropping poison gas. The forces of Emperor Haile Selassie fought bravely but were defeated by superior technology, especially the airplanes and gas. The Italians took the capital and other major cities and the Emperor fled to London. But resistance continued in the countryside down to World War II, and in 1941 the British supported a major Ethiopian revolt that cast out the Italians and put Selassie back on his throne.

But that is only the beginning of the story that Jeff Pearce tells. Ethiopia was the only remaining nation in Africa that had never been ruled by Europeans, and Italy's obvious intention to conquer it aroused the sympathy and anger of millions of people across the world. There were marches in support of Ethiopia from Harlem to Cape Town; thousands of African Americans tried to volunteer for the Ethiopian armed forces, but only a handful ever made it to Africa. Among those who got involved in trying to help Ethiopia were many of the future leaders of the anti-colonial movement around the world: Gandhi, Jomo Kenyatta (future president of Kenya), Eric Williams (future Prime Minister of Trinidad), C.L.R. James (the main theorist of third world Marxism), J.B. Danqua of Ghana. Some of the organizations they founded changed their names after Ethiopia fell and began to work for the freedom of all Africa; their influence was especially strong in the Caribbean. It was at this time that Haile Selassie became an icon for Africans around the world, such as the founders of Rastafarianism in Jamaica. Ethiopia was the cause of the hour. In Europe its place was soon taken by the Spanish Civil War, but across Africa and the Caribbean it remained at the center of politics for a generation.

The conquest of Ethiopia also exposed the weakness of the League of Nations. Ethiopia was a member of the League, and the League's charter required that all members help preserve each other's independence. Pearce makes much of the two-faced racism of most Europeans, who talked boldly about the self-determination of peoples but really meant white peoples. Some of the British leaders, especially Anthony Eden, considered the Ethiopian crisis a major test of the League, British power, and the ability of the world to avoid another major war. Others did not frankly much care, or worried that opposing Mussolini over Ethiopia would only drive him into the arms of Hitler. This was the position of French Premier Pierre Laval, an oily character who made things more complicated by making contradictory statements and promises to everybody. When the French socialists came to power in 1936, the new Premier Leon Blum wanted very much to help Ethiopia, but by then it was too late. It's a sad story, and Pearce devotes far too much time to it; reading about debates in the League of Nations bores me to tears, and I'm a historian.

Pearce devotes too much time to lots of other stuff as well, and as a result Prevail is far too long. It also rigidly adheres to a chronological scheme that makes it hard to follow any particular thread, such as the interest of African Americans or the political situation in Ethiopia. Since it is the only book on the subject I know, you should consider it if you are really interested in the subject, but otherwise not.
Posted by John at 2:32 PM