The Vikings Grew Barley in Greenland 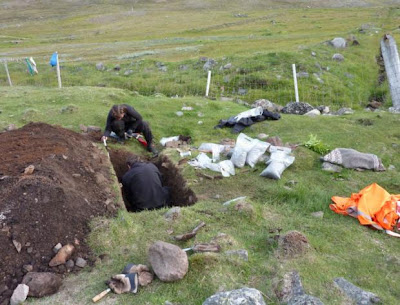 Working in a trash midden at a Viking farm in Greenland, archaeologists have found charred grains of barley. This verifies a statement in a document of ca. 1250, the King's Mirror:


As to whether any sort of grain can grow there, my belief is that the country draws but little profit from that source. And yet there are men among those who are counted the wealthiest and most prominent who have tried to sow grain as an experiment; but the great majority in that country do not know what bread is, having never seen it.

The grains have not yet been radiocarbon dated, but they come from the early decades of the settlement, which lasted from 986 to around 1420 AD.

The excavators think the grains must have been grown in Greenland, since they had not yet been threshed, and anybody carrying grain on a sea voyage would probably not want to have it mixed with chaff.

Viking Greenland was one of the weirder human experiments, and I find it fascinating.
Posted by John at 7:21 PM