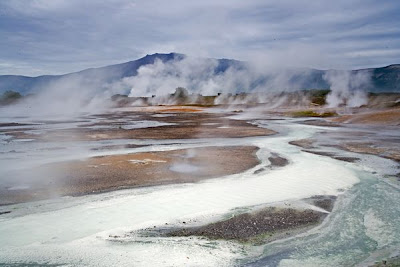 A bit of outdated Victorian science that still lingers in the public discourse is that we know life came from the sea because what flows in our veins is mostly seawater. Not so.

Life as we know it depends very precisely on the movements of electrolytes through our cells -- too much sodium or not enough potassium and our protein machinery stops working. Modern cells are constantly pumping out sodium to keep their balance right, which for most life forms is a nearly equal ratio of sodium and potassium. Seawater has far too much sodium; the best estimate is that the seas of 4 billion years ago had 40 times as much sodium as potassium.

"For cells to synthesize proteins—their molecular machines—they need a lot of potassium. Sodium blocks these activities," said study co-author Armen Mulkidjanian, a biophysicist at the University of Osnabrück in Germany. "Life cannot live without synthesizing proteins, so it must keep potassium high."

Searching for an environment that would provide the right electrolytes for life, Mulkidjanian and his colleagues hit on geothermal springs, like the mud pots of Yellowstone:

Scientists had long ignored mud pots as possible analogs to primordial ooze, because the modern-day versions are swimming in sulfuric acid, a deadly chemical that forms when hydrogen sulfide encounters oxygen in the atmosphere. "People were scared away by the acidic condition, but Earth used to have very little oxygen in its atmosphere," Mulkidjanian said. "These anoxic environments were stable over millions of years and were probably conducive to supporting the first life on Earth."