More on the Eisenhower Monument Controversy 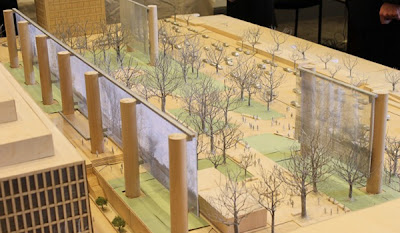 The controversy over the Eisenhower Memorial is morphing into a classic Culture Wars battle. An entity that calls itself the National Civic Art Society has issued a 153-page attack on Frank Gehry's design for the memorial, which complains:
Not satisfied with attacking the design, they also try to smear both Geary himself:


In 2003, Gehry refused to help design a replacement for the Twin Towers since he was not offered enough money. That alone makes Gehry unworthy of Eisenhower, who exemplified selfless public service.

And the sculptor Geary chose to work on the barefoot boy sculpture:


The design of the boy Eisenhower statue is being advised by Charles Ray, an artist whose work sexualizes children and is obscene.

Eisenhower may have exemplified public service, but he also believed in capitalism, and do the people behind the NCAS really want to attack Geary for charging what the market will bear? 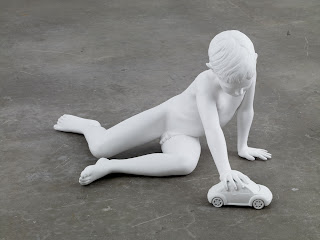 Charles Ray has sculpted naked boys (above, The New Beetle), and I won't say anything about that except that his work is explicitly classical, and the NCAS claims to like classical art. In launching their own contest for a design of the monument, they said:


The recent selection of a Frank Gehry design for a national monument to Dwight D. Eisenhower, 34th President of the United States and the Supreme Commander of the victorious Allied Forces in Europe in the Second World War, is deeply troubling to many Americans. Devoid of, and in defiance of, traditional aesthetic principles, the proposed design does not convey the meaning, inspiration and dignity suitable to commemorate a distinguished general and president of the United States.

Gehry's proposed basketball court-sized metal mesh screens hung between massive concrete posts over sixty feel tall would be an uncivil, brutal insult to the classical city envisioned by Pierre L'Enfant and our nation's Founders. Rather than being in harmony with Washington, the proposed monument would screen off and separate itself from the city, blocking views of the National Mall. This proposal fails Eisenhower, fails beauty, fails our capital city, and, in so doing, fails our nation. 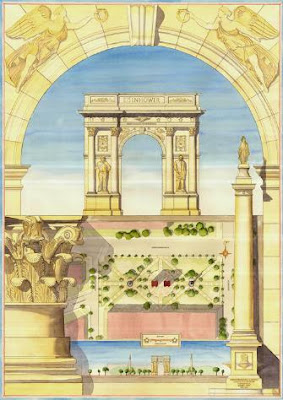 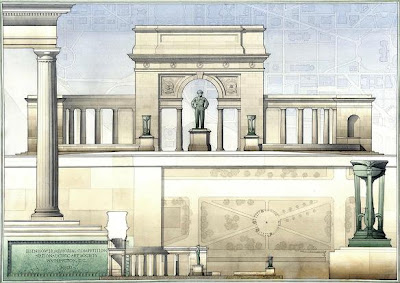 Above, the entries that won first and second prize in the NCAS competition. (Seriously, a triumphal arch?)

I understand that putting up monuments to politicians is an inherently political act, but I find it sad that the question of what to put in an important public space should get bogged down in this sort of trivia. The site of the memorial is surrounded by profoundly ugly buildings and the whole neighborhood desperately needs something to liven it up. This creates a dilemma for the Eisenhower Memorial Commission. They are working for two audiences: tourists from Kansas who want a monument to a man they idolize, and the cool young people the city wants to move into its neighborhoods. A marble statue of Ike in uniform might please the tourists, but it will be mocked by the neighbors, and would probably feel foolish to the sophisticates on the commission. 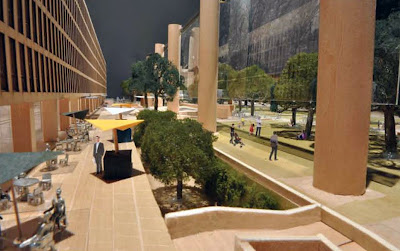 My gut feeling is that Washington is so full of traditional monuments that another one would be completely ignored, just like the monuments to Farragut and McPherson and Thaddeus Kosciuszko already are. If the people at the NCAS want a monument that people will notice, they either need to support something innovative, or something gigantic. And given that Eisenhower was famously modest (for a President, anyway), gigantic won't work. 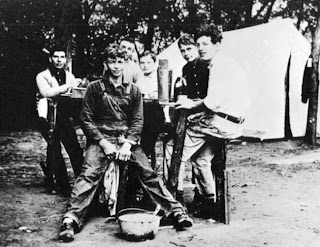 I also wonder if these critics have thought very hard about who Eisenhower really was, or about his place in American history. (Above, Eisenhower in Abilene, 1904.) Writing in the Architectural Record, Christopher Knight defends Gehry's design like this:


Eisenhower famously described himself as a plain guy from a plain Midwestern town. Between large stone reliefs depicting his achievements as general and president, a life-size sculpture would show him as a boy in Abilene, Kansas. Gehry took his cue from the general's celebrated 1945 homecoming speech, after World War II. "Because no man is really a man who has lost out of himself all of the boy," the famous speech begins, "I want to speak first of the dreams of a barefoot boy."

Homecoming signs cheered, "Welcome to Our Hero," but Eisenhower gently demurred: "I am not the hero, I am the symbol of the heroic men you people and all the United States have sent to war." Citizen-soldiers, in other words, were the true victors. That profound sentiment seems remote today, when citizens instead rely on a professionalized military-industrial complex -- one whose power Eisenhower also warned against in his presidential farewell address. Gehry and Ray should be praised, not attacked, for putting Eisenhower's conviction in the heart of his memorial.

In an age of angry ranting, Eisenhower was calm. He refused to endorse the "missile gap", get frantic about Soviet spies in the State Department, or demonize liberal Democrats. His idea of how to defend America was to pay down the national debt. (Partly through very high taxes on the rich.) He would have hated, not this design, but the very idea of waging a political controversy over public monuments. 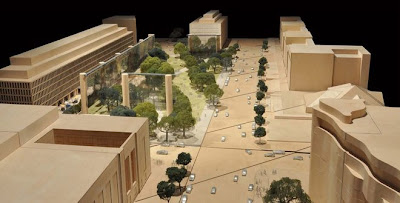 Eisenhower grew up on a farm, and he retired to a farm. He saw farming and small town life as central to the American experience. Is it wrong to make that understanding, rather than his military accomplishments, central to his monument? Gehry has not ignored Eisenhower's public career, and the design includes two carved reliefs depicting Eisenhower as general and Eisenhower as president. Is it wrong to concentrate the rest of the monument on his underlying vision of America? Or to design a monument that will make the neighborhood more attractive?

I like this design, and the more people like the NCAS attack it, the more I am convinced that it is the right way to go. By their strident, angry words, these critics show that they do not understand Eisenhower at all.
Posted by John at 2:04 PM