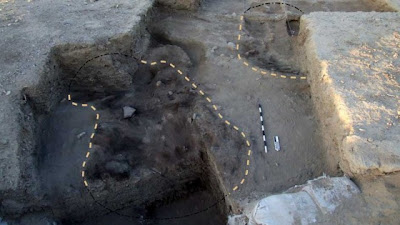 Results from this amazing site in Jordan, about 20,000 years old, have just been published in PLoS One by Lisa Maher and colleagues. There has been much archaeology of a more recent period in this region, the "epipaleolithic" or Natufian culture of around 15,000 to 11,000 years ago. The Natufians had stone houses and semi-permanent villages, they harvested wild grain and hunted wild sheep, and most theories about the origin of agriculture and settled life in the Middle East give the Natufians a prominent place. On a more speculative plane, anthropologists interested in the central place of the Home, or the Hearth, or the Ancestral House, or whatever you want to call the permanent association of a family with a particular dwelling, point to the Natufian as the time when this complex of beliefs and rituals may first have arisen. 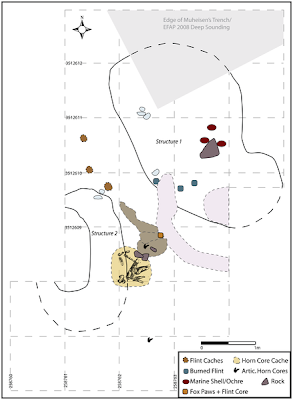 The problem with pinpointing the origins of anything is that somebody always comes along and finds an earlier example. Now Kharaneh IV can be added to a small group of sites where houses have been found much older than those of the Natufian. Houses do not imply settled life; there are modern hunter-gatherers who live for part of the year in fairly well-built houses, or who repeatedly rebuild flimsy houses on the same stone foundations every time they visit a site. But the difference between Kharaneh IV and a Natufian settlement looks more like one of degree rather than kind, and the same can be said for the difference between a Natufian settlement and a neolithic farming village. It becomes more clear by the year that there was no agricultural "revolution" in the Middle East, just a very, very slow transition to more settled life and more dependence on increasingly domesticated plants and animals. To quote the excavators, "searching for the ‘first’ huts, houses, sedentary sites or ritual behaviors, as we currently understand them, may be a futile enterprise." 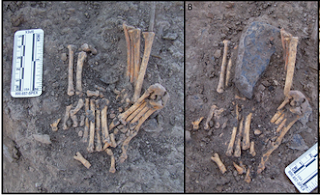 Plus, this is just a really cool site. It is quite large, more than 20,000 square meters (5 acres), rises almost 2 meters (6 feet) above the surrounding landscape, and according to the excavators "it is easily identifiable by its staggering concentration of stone tool debris and animal bones." The houses excavated in 2010 were surrounded by all sorts of wonderful evidence for how the inhabitants lived, like caches of worked stone and bone. The pictures above show two views of a flint core surrounded by four fox paws, probably the remains of a fox-skin pouch. Those are tiny bones that would not survive a century in the soils I usually work with, but these are 20,000 years old. 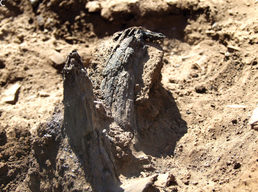 Above, a gazelle skull with the horn cores still attached. The horn cores of antelope and goats are very hard, and they were used to manufacture a wide range of tools and implements down into the nineteenth century. (In Europe and the US, that is; they are probably still used in a lot of places.) 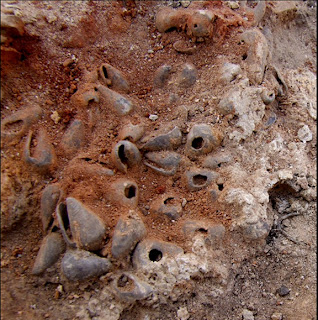 The remarkable archaeology of the late Paleolithic in the Middle East continues to teach us about the distant origins of our civilization, and the extremely slow process by which it arose.
Posted by John at 8:39 AM