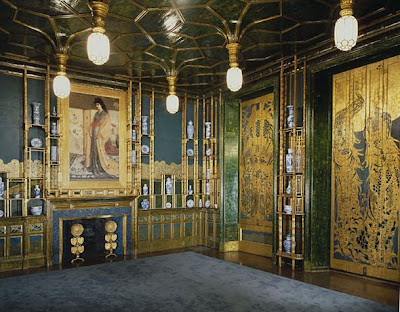 The Peacock Room is one of the most famous rooms in the world, a perfect symphony of decorative elements. It is now in the Freer Gallery in Washington. It has a great story, as the Gallery's web site explains: 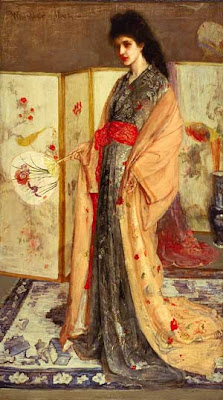 The Peacock Room was once the dining room in the London home of Frederick R. Leyland, a wealthy shipowner from Liverpool, England. It was originally designed by a gifted interior architect named Thomas Jeckyll. To display Leyland's prized collection of Chinese porcelain to best advantage, Jeckyll constructed a lattice of intricately carved shelving and hung antique gilded leather on the walls. A painting by James McNeill Whistler (1834-1903) called La Princesse du pays de la porcelaine — or The Princess from the Land of Porcelain — occupied a place of honor above the fireplace. 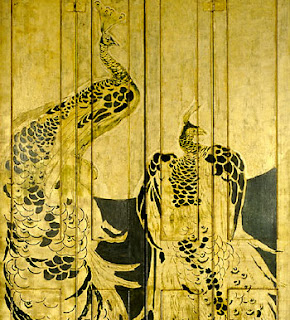 Jeckyll had nearly completed his commission when he consulted Whistler — who was then working on decorations for the entrance hall of Leyland's house — about the color to paint the dining room shutters and doors. Concerned that the red roses on the leather hangings clashed with the colors in The Princess, Whistler volunteered to retouch the walls with traces of yellow. Leyland permitted Whistler to make that minor alteration and also to adorn the wainscoting and cornice with a "wave pattern" derived from the design on the leaded glass of the pantry door. Assuming the decoration of the room to be virtually complete, Leyland went back to his business in Liverpool. 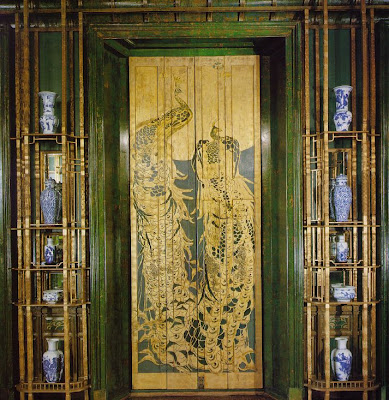 In his patron's absence, Whistler was inspired to make bolder revisions. He covered the ceiling with Dutch metal, or imitation gold leaf, over which he painted a lush pattern of peacock feathers. He then gilded Jeckyll's walnut shelving and embellished the wooden shutters with four magnificently plumed peacocks. Whistler wrote to Leyland that the dining room was "really alive with beauty — brilliant and gorgeous while at the same time delicate and refined to the last degree," boasting that the changes he had made were past imagining. "I assure you," he said, "you can have no more idea of the ensemble in its perfection gathered from what you last saw on the walls than you could have of a complete opera judging from a third finger exercise!" He urged Leyland not to return to London yet, since he did not want the room to be seen before every detail was perfect. 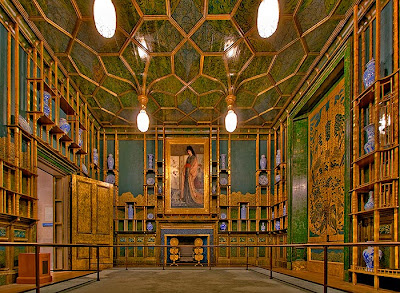 Yet Whistler entertained visitors and amused the press in the lavishly decorated room, never thinking to ask permission of the owner of the house. His audacious behavior, coupled with a dispute over payment for the project, provoked a bitter quarrel between the painter and his patron. Leyland would not consent to pay the two thousand guineas that Whistler wanted: "I do not think you should have involved me in such a large expenditure without previously telling me of it," he wrote to the artist. Eventually Leyland agreed to half that amount, but he further insulted Whistler by writing his check in pounds, the currency of trade, when payment to artists and professionals was customarily made in guineas. A pound is worth twenty shillings and a guinea twenty-one, so the already offensive sum was also smaller than expected . 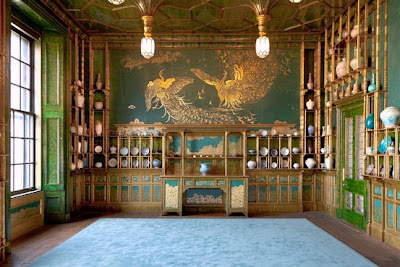 Perhaps in retaliation, Whistler took the liberty of coating Leyland's valuable leather with Prussian-blue paint and depicting a pair of peacocks aggressively confronting each other on the wall opposite The Princess. He used two shades of gold for the design and highlighted telling details in silver. Scattered at the feet of the angry bird are the coins (silver shillings) that Leyland refused to pay; the silver feathers on the peacock's throat allude to the ruffled shirts that Leyland always wore. The poor and affronted peacock has a silver crest feather that resembles the lock of white hair that curled above Whistler's forehead. To make sure that Leyland understood his point, Whistler called the mural of the fighting peacocks "Art and Money; or, The Story of the Room." He obtained a blue rug to complete the scheme and titled the room Harmony in Blue and Gold. After concluding his work in March 1877, the artist never saw the Peacock Room again. 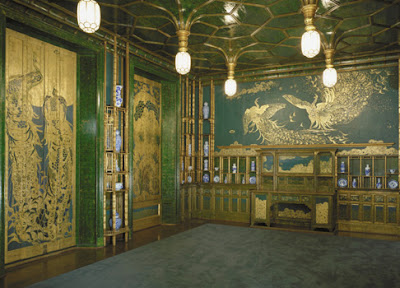 Actually, as funny as I might find it, I have heard of Leyland. This is a very nice room, I can imagine dining inside. :) When I'm out of the cheap hotel Liverpool centre, I'll give it a visit!