Churchill's Obsession with the Tirpitz 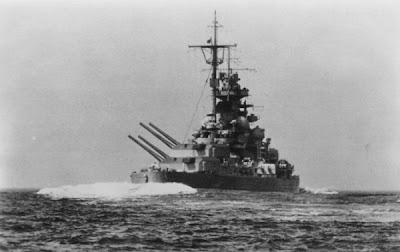 The Tirpitz was the sister ship of the Bismarck, but this huge, powerful German battleship never put to sea on a grand, suicidal raid. Instead she was kept in various safe harbors, mainly in Norway, where her very existence threatened British plans and gave Winston Churchill fits. Patrick Bishop:


The shortest memorandum in the vast output of instructions, queries and exhortations generated by Winston Churchill during the Second World War is only three words long: ‘Where is TIRPITZ?’ he demanded of the First Sea Lord, Sir Dudley Pound, on December 14th, 1942. The answer was that she was tucked up safely in a fjord near Trondheim as her crew hung bunting in the messes in preparation for another Christmas of inactivity.

Of all Hitler’s capital ships Tirpitz cost most and did least. Yet her existence seemed to haunt Churchill’s imagination and his desire to see the ‘Beast’, as he tellingly called her, sunk or at least disabled bordered on the obsessive. As long as she was afloat the prime minister bombarded admirals and air marshals with demands for action, emphasising that he was prepared to pay a high price to achieve her destruction. ‘The crippling of this ship would alter the entire face of the naval war and … the loss of 100 machines or 500 airmen would be well compensated for,’ he declared in another missive to Pound.

The quest to destroy Tirpitz lasted four years, soaking up a colossal amount of energy and resources and costing many lives. Between October 1940 and November 1944 she was the target of 24 major air and sea attacks. They ranged from conventional heavy bombing raids to highly innovative operations, notably the penetration of her defences by X-Craft midget submarines as she lay in Kaafjord in the far north of Norway in September 1943. . . .

Fear of her destructive potential led to one of the most notorious episodes of the war at sea. In July 1942 the belief that the battleship was at large – mistaken as it turned out – was enough for Pound to order British and American naval escorts to abandon the Russia-bound convoy PQ.17 and the merchantmen to scatter. The result was that 24 of the 35 ships were sunk, not by Tirpitz but by U-boats and aircraft.

Winston Churchill was a remarkable man, but he was also a very odd one, and some of his obsessions cost Britain dearly during the war.
Posted by John at 7:31 AM