Zorats Karer, the Army of Ghosts 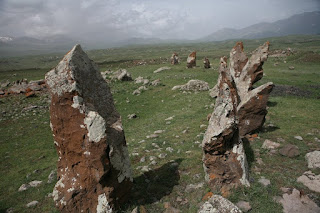 Zorats Karer is a complicated arrangement of megalithic stones in Armenia. This is one of those sites about which every amateur archaeologist in the country has an opinion, and you see all kinds of crazy claims about what is was and how old it is. The best guess seems to be that it is both a royal tomb and a site for astronomy-related rituals, dating to between 2000 and 1000 BC. 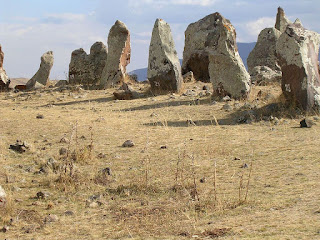 The site has had a bunch of names, including Ghoshun Dash, which means ‘Army of Stones’ in a Turkic dialect, and Karahundj or Carahunge, which was dreamed up by a twentieth-century archaeologist because it includes a word for ‘stone’ and an Armenian suffix that makes the whole word sound like Stonehenge. But it seems that some of the locals call it Zorats Karer, the Army of Ghosts, and who can argue with that? 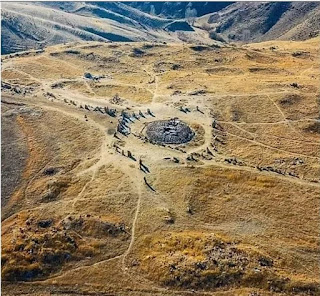 Aerial view showing the complexity of the site.View of the smaller circle in the center of the complex. 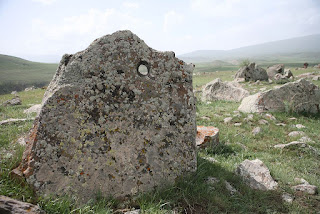 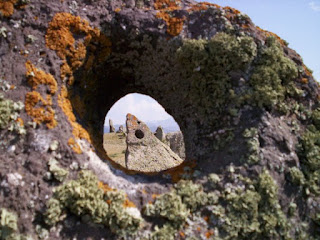 One of the fascinating things about the site is the holes that were carefully drilled through several of the menhirs. Look through these in the right way and you can get all sorts of site lines toward things like the midsummer sunrise or the setting of the Pleiades on the first day of spring. Such alignments are the obvious reason to have gone to all this trouble, but the bewildering variety of claims I found in half an hour online gives me pause. Especially since some of the alignments work better if you postulate dates like 33,000 BC. So I am afraid the exact use of these features remains a mystery. 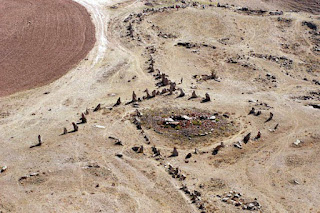 Another thing that interested me was wikipedia's account of how the site has been interpreted. The first scholar to publish about the site said it was a corral for cattle, which is in "there is nothing so stupid that some scientist has not said it" territory. In the 1950s some locals said it was a burial place, but they thought the people buried there were Armenians who had fought the Turks in recent times. Archaeologists are under a lot pressure these days to consult the local people and get their indigenous wisdom before offering any hypothesis, but when it comes to things 3,000 years old, that usually doesn't get you very far. But then they weren't any farther off than that first anthropologist.And to think that I never heard of it until today.
Posted by John at 8:40 PM