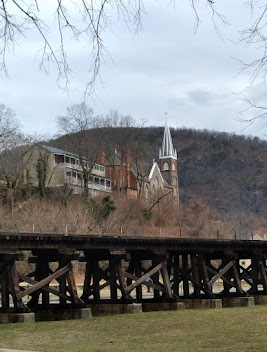 My son Ben and I drove over to Harpers Ferry today to explore. On the way I gave him my version of the John Brown saga and told him what I have recently learned about the Civil War fighting there. The trip takes about an hour, which is a great length of time for feeling like you are getting away without wasting too much time getting there. 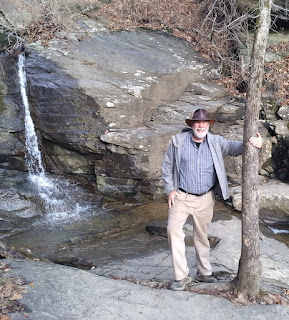 We parked at the Visitor Center and walked to the town along the Shenandoah River, a steep downhill followed by a level stroll along the old Shenandoah Canal. The walk along the stone steps was made delightful by this little stream that paralleled us much of the way down. 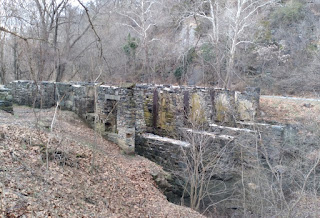 The first ruins we encountered were those of the Hall Island pulp mill, in operation from the 1880s to the 1930s. 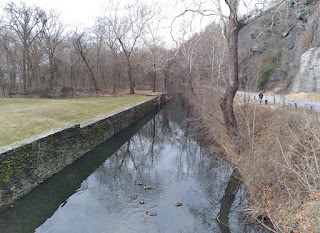 The Shenandoah Canal; the wall has been rebuilt. 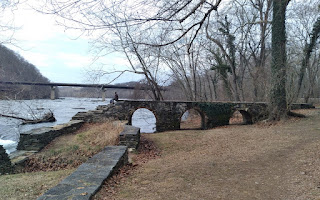 Water gates for the raceway system on Virginius Island, with an unknown stranger contemplating the river. 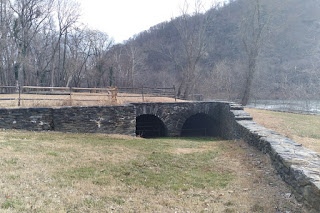 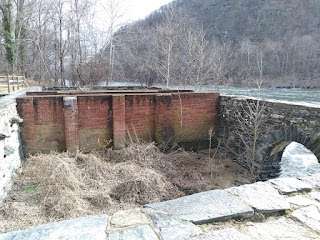 Cotton mill ruins. This was built in the 1840s, converted to a flour mill after the Civil War, and abandoned after the 1889 flood. Old photographs of the building here. 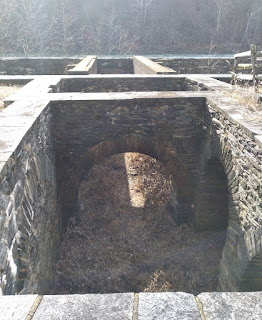 Turbine pit at the cotton mill. 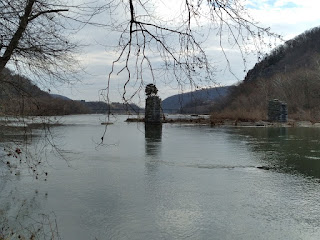 View of the Potomac from the Point, where the Potomac and Shenandoah come together. Love the trees growing on the old pylons. 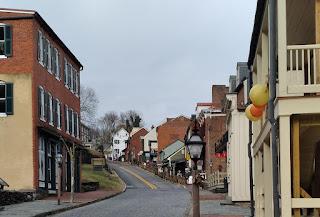 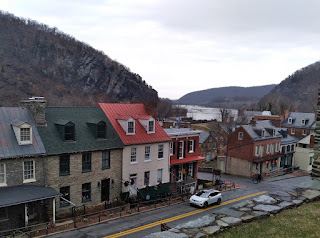 Views of the town. 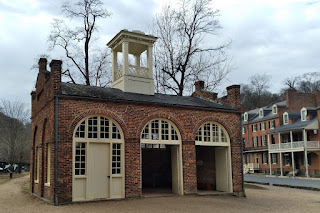 The Engine House, aka John Brown's Fort. The Park Service doesn't make a huge deal about this building, I suppose because it was moved and altered so much. Its history included being taken to Chicago for the 1892 World's Fair, and I don't think anybody really knows how much of what came back was authentic. It is still not back on its original site, but sits about 50 yards from the monument to Brown and his men. Cute house on the slope. 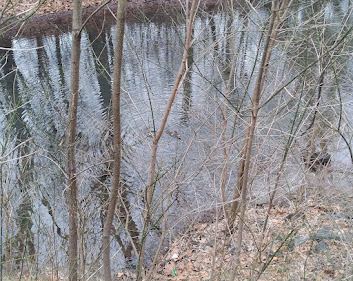 Duck ripples in the canal. It was a great trip, and Ben likes to hear me talk about history more than any of my other children. According to the signs it is 1.6 miles down the trail from the Visitor Center to Harpers Ferry, and we walked around quite a bit before deciding to walk back. The last part is a 200-foot climb from the river up the stone stairs to the top of the bluff, which left my legs sore. But I'm still glowing from the trip.
Posted by John at 7:29 PM