Why is Construction Productivity Declining?

I have spent a few years of my life hanging around construction sites, and this is a question I have often pondered. The construction business is inefficient and I have had the feeling that the problem has gotten worse over the course of my career. Now I find some data that confirms my intuition: 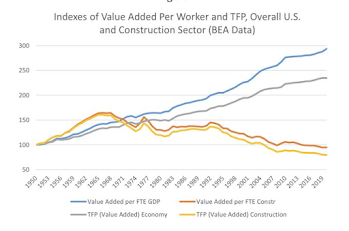 The rising lines are two measures of productivity in the economy as a whole, the declining ones those measures for the construction industry.

Safety is unquestionably a cause; construction is much safer than it used to be, and this takes time and money.

I think a big factor is that more and more construction is done in crowded places where accomodations to limited space, traffic, and so on are part of the deal. For example, the recent work along I-66 in northern Virginia was done so as to minimize lane closures, and they built ten miles of new temporary lanes to keep traffic flowing. Other times work is done at night, which I am sure is less productive, or in limited daytime hours, like between 9 and 3. Work in cities may also have limited hours, and things like getting dumptrucks to the site may require complicated traffic workarounds and stationing people in the street all day to direct traffic. Crowding also means having to pay for parking space and sometimes wasting a lot of time moving vehicles around. Building on sites that have been built on before (brownfields) is more complex and expensive than building on farm land (greenfields), so the more we build in cities, the more expensive construction is in general. Rebuilding or restoration is more complex and expensive than building from scratch.

There is also a bureaucratic factor that is internal to the industry. A civil engineer once explained to me that 20 years ago if the builders noticed a place in the plans where things didn't line up quite right, the supervisor would get together with an experienced carpenter and work out a fix. Now they send the plans back to the architect – this is called an RFI, request for information – and the architect has to generate a whole new set of plans with a fix. Partly this is just everyone being risk-averse; partly it has to do with the LEED environmental certification, which requires that buildings be built exactly as they were planned.

The number of required inspections keeps going up. Some of this is local regulation, some is environmental rules, some is corporate policy by the builder or the developer. Risk aversion and lack of trust generate bureaucracy and delays.

I think there are also labor supply issues; every architect I know complains that builders don't have people who know how to do stuff like install fire alarms and construct ventilation systems.

In general I would say that construction costs keep going up because we keep trying to minimize the harm that building does to workers, neighbors, the environment, and the community, and that costs money and takes time.