One Born Every Minute

From Matt Levine, here is part of the SEC complaint against the people running a fraud called CoinDeal:

According to the SEC’s complaint filed in the U.S. District Court for the Eastern District of Michigan, Chandran, Davidson, Glaspie, Knott, and Mossel falsely claimed that investors could generate extravagant returns by investing in a blockchain technology called CoinDeal that would be sold for trillions of dollars to a group of prominent and wealthy buyers.

Chandran, a recidivist securities law violator and convicted felon, claimed to own a unique blockchain technology that was on the verge of being sold for trillions of dollars to a group of reputable billionaire buyers (“CoinDeal”). Chandran further claimed his business required interim financial support until the sale transaction closed. Together with and through other named Defendants, Chandran targeted mostly unsophisticated investors with false and misleading promises and representations that investments in CoinDeal would soon yield extremely high returns from the imminent sale of his business. Ultimately, there was no sale, and no distribution of proceeds, because CoinDeal was a sham. . . .

Chandran typically provided status updates on the supposed deal, including but not limited to: the involvement of foreign central banks and the United States Department of Homeland Security; the latest board meetings of the consortium of wealthy buyers; the role of certain political figures; and the causes of “temporary” delays to the sale closing. These updates were designed to lull investors and induce them to continue investing in CoinDeal.

One of the excuses they used to explain why the payout was delayed was that business titans were jockeying for leadership:

The best part is this table that was sent to investors showing their potential returns: 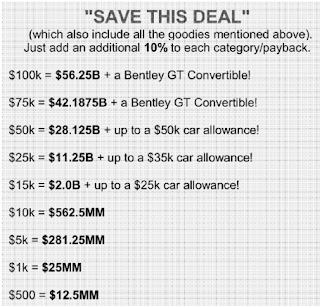 So the top investoris were promised a return of 56 million percent. What you have to wonder is, if you're getting all those billions, why do you also need a free Bentley?

Incidentally, defendant Linda Knott was not part of the original CoinDeal group; she heard about them, invested $1,000 of her own money in their scam, and then set up a fund that would allow people who didn't have the $500 minimum investment to get on the CoinDeal gravy train. According to the SEC, she raised $749,000 this way, pocketing $79,000 and investing the rest in CoinDeal.

What an astonishing collection of fools. As Levine says, CoinDeal's email list would be worth a fortune.

I’ve known two Ponzi scheme men. Both were personable, even when challenged on their promises of riches. Both served time for their felonious schemes. Their families were paupered. They had no remorse. Greed was the underlying cause of their success and their downfall. Their chumps were greedy and deluded themselves that they were smarter than others. I felt that strong pull of Greed, but resisted only because I had family lore that strongly warned against exactly this situation. Hubris/Arrogance is a strong drug.