Bosta: Vikings on the Isle of Lewis 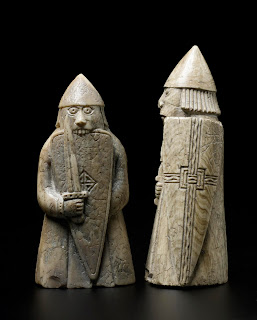 The only famous bit of Viking archaeology on Lewis, or anywhere in the Hebrides for that matter, is the chessmen, 78 amazing pieces found in 1831. But these date to the very end of the Viking age in the 12th century, and written sources tell us that the Vikings were on Lewis by 800 AD. What other traces did they leave behind? 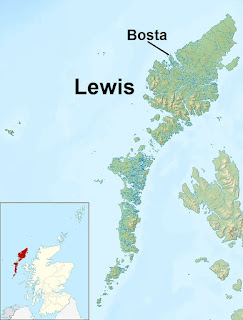 In 1992 a severe storm exposed stone walls of an ancient village which had lain hidden under sand dunes at Bosta Beach. These included oval foundations from Pictish houses of the Iron Age and rectangular Viking foundations. This probably should not have been a surprise, since Bostadh means farm in Old Norse. 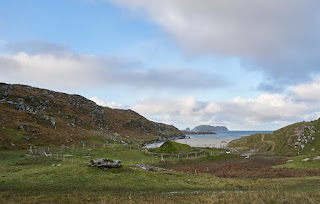 View of the site, with a reconstructed Pictish house in the center. You can see that this is a sheltered valley with access to the sea, the perfect spot for a Viking setller. 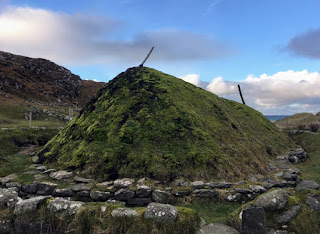 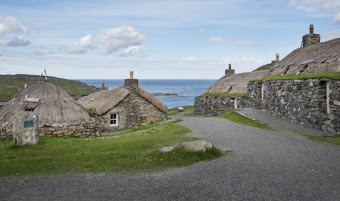 Incidentally it was the Viking form, the rectangular "Black House," that dominated the Hebrides from Viking times down to the nineteenth century, so that was one concrete legacy they left. Above is a restored village of Black Houses you can visit on Lewis, showing the form, although of course the chimneys are a 17th-century addition.
Vikings made boring pottery and not much metalwork was found at Bosta. The most interesting finds had to do with food, both animals and plants. Let's start with fish, because there was a major difference between the Viking period fish bones and those from the Pictish period. The Picts ate fish, but it was all caught close to shore. The Vikings, as you might expect, went much farther out to sea for their catches, and they also practiced net fishing of herring, which required the cooperation of several seagoing boats and dozens of people. This was another long-term impact they had on these islands, re-orienting them toward the Atlantic and in particular toward communal fishing. 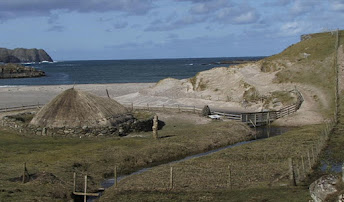 The most common animal bones were actually from cattle, but cattle bones are much bigger and tougher than fish bones, so they survive much better, so this doesn't necessarily mean they ate more beef than any other meat. The bones included many young calves, which means that they kept their cows mainly for their milk; if you want beef, you let the cows grow for a year or two before you kill them. In later times the rents of some islanders were paid in butter.
Sheep, by contrast, were not killed until they were a year old, which is the normal pattern when people raise them for meat and wool. There were very few pig bones. The wild species included red deer (elk), gray seals, dolphins, otters, and a pine marten, the last two hunted for their fur. 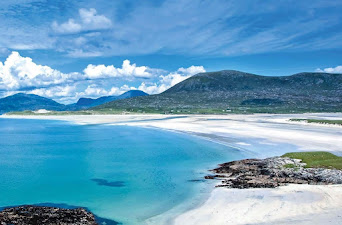 The plant remains show that barley and oats were the main crops, as one would expect in this environment. The Vikings also grew flax, which the Picts did not, so that might be something else they introduced to the island.
How many Norsemen came to Lewis? Modern genetic studies suggest that about 22% of islanders' genes in the male lines come from Scandinavia, and 11% in the female lines. But that may not reflect the situation in the Viking Age; after all, the Scots reconquered the islands around eight hundred years ago, and we know of at least two waves of migration from the mainland to the outer islands, one in the 1740s. So in the year 1000 I suspect the number of Vikings was larger. The 2:1 ratio of male to female Norse is less than you see in many other violent conquests, so it seems that migration to the Hebrides was something of a family affair. 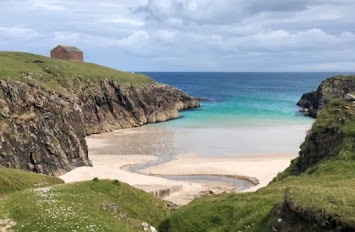 Combining this sort of archaeology with written sources gives us a picture of Viking life on Lewis. Some people lived in towns; Stornaway seems to be a Viking foundation. A Jarl lived there, with a court, which we know about because some bits of verse composed by Hebridean skalds were written down much later. But most people lived in farmsteads scattered across the island. They grew oats, barley, and flax; they raised cattle and sheep; dairying was a major focus of their work, especially for women. They lived side-by-side with people of Pictish and Irish descent, and their descendants ended up speaking Gaelic, a version of Irish with a bunch of Norse loan words. 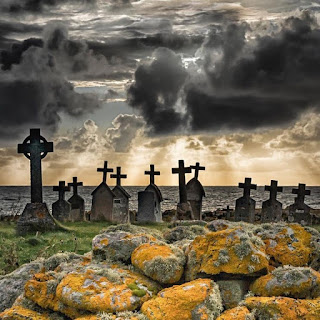 Graveyard on Barra, Outer Hebrides
But in their hearts, the men at least were people of the sea. Those surviving bits of Hebridean poetry are all about sailing, including a poem called "Gigantic Waves." They loved ships and boats. When they went to war, it was by ship; a lord's strength was measured in ships. When they wanted a contest, it was often a rowing race. The work that most captured their imaginations was at sea, daring the Atlantic in pursuit of fish, seals, and whales. Communities were built around herring fishing, and local leaders arose to lead these communal hunts. Their homes were built so they could look out at the ocean. Very often, they died at sea, for the Atlantic was not a forgiving place.
Posted by John at 8:25 AM