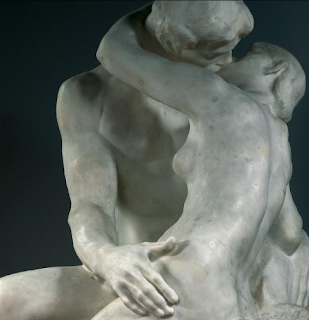 Stefan Zweig, remembering, years later, his visit to the studio of the sculptor Rodin:

After lunch we went over to the studio. It was a huge room full of replicas of the most important of his works, but among them stood or lay hundreds of delightful little individual studies – of a hand, an arm, a horse's mane, a woman's ear, usually just in plaster. To this day I still remember in detail many of these sketches, which he did just to keep his hand in, and I could talk for hours on end about that one hour I spent in Rodin's studio. Finally the master led me over to a plinth on which his latest work, the portrait of a woman, was still hidden under damp cloths. He removed them with his heavy, furrowed, peasant hands, and stepped back. Instinctively, I cried "Admirable!" and was then ashamed of saying something so banal. But with calm objectivity in which there was not a grain of vanity, he only murmured in agreement, as he viewed his work,"N'est-ce pas?" Then he hesitated. "Ah, except there, by the shoulder. . . just a moment!"

He took off his indoor jacket, put on his white coat, picked up a spatula, and with a masters' touch smoothed the shoulder of the soft feminine skin that breathed as if it were alive. Once again he stepped back. "Here, too," he murmured. Yet again a tiny detail enhanced the effect. Then he said no more. He stepped forwards, stepped back, looked at the figure relected in a mirror, growled and uttered indistinct sounds, made changes and corrections. His eyes, which had been full of friendly abstraction at the lunch table, now flashed with a strange light; he seemed to have grown taller and younger. He was working, working and working with all the passion and power of his mighty, heavy body. Whenever he took a vigorous step forwards or back, the floorboards creaked. But he didn't hear them. He did not notice that a young man was standing behind him, never making a sound, his heart in his mouth, happy to be able to watch such a unique master at work. He had entirely forgotten me. To him, I simply wasn't there. Only his creation and his work existed for him, and beyond them, unseen, the vision of absolute perfection. 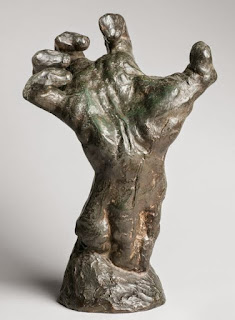 This went on for a quarter-of-an-hour, half-an-hour, I don't now remember just how long. Great moments are always outside time. Rodin was so deeply absorbed in his work that a clap of thunder wouldn't have aroused him. His movements became more and more decisive, almost irate; a kind of wildness or intoxication had come over him, he was working faster and faster. Then his hands slowed down. They seemed to have understood that there was no more for them to do. Once, twice, three times he stepped back to look, without making any more changes. Then he murmured something quietly into his beard, and replaced the cloths around the figure as affectionately as you might place a shawl around the shoulders of the woman you love. He took a deep breath, released from tension. His figure seemed to grow heavier again. The fire had gone out. Then came the great lesson for me, something that I could hardly grasp. He took off his white coat, put his jacket on again, and turned to go. He had entirely forgbotten me during that time of extreme concentration. He no longer knew that a young man whom he had taken to the studio himself, to show him the place where he worked, had been standing behind him holding his breath, fascinated, as motionless as his own statues.

He made for the door. As he was about to open it, he saw me and looked at me almost angrily. Who was this young stranger who had stolen into his studio? But the next moment he remembered, and came toward me, as if ashamed of himself. "Pardon, monsieur," he began. But I would let him say no more and gratefully took his hand.