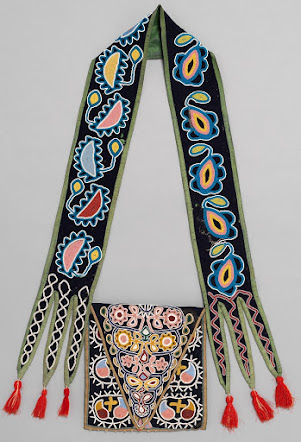 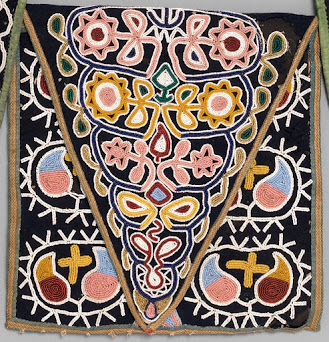 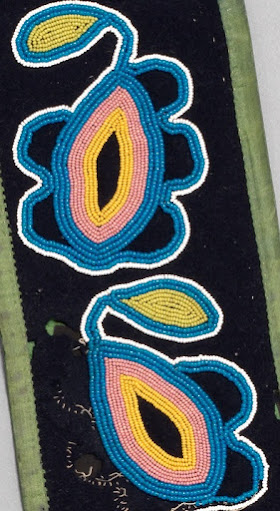 Shoulder Bag, Creek, mid Nineteenth Century
In the late 1700s Native American men began wearing shoulder bags like these for formal dress occasions. (For example treaty negotiations with white men, which is why we have several depictions of them in art from the time.) The bags are leather and the form seems to have been inspired by the ammunition pouches worn by European soldiers. The images here come from a new exhibit at the Met, Art of Native America: The Charles and Valerie Diker Collection.

Shoulder Bag, Ojibwa, Nineteenth Century
I love the way this exhibit is presented. My big complaint about the Museum of the American Indian in Washington was that the objects were presented as if they had emerged from a timeless, purely Native past, even though many of them were obvious responses to European imagery and technology. But this exhibit situates all the objects historically at the meeting point of diverse Native cultures with Europe and shows that they were responses to a world that was changing at cataclysmic speed. The exhibit is curated by Patricia Marroquin Norby, a Native American and the Met's new curator of Native American art. (Profile of Norby at the Times) 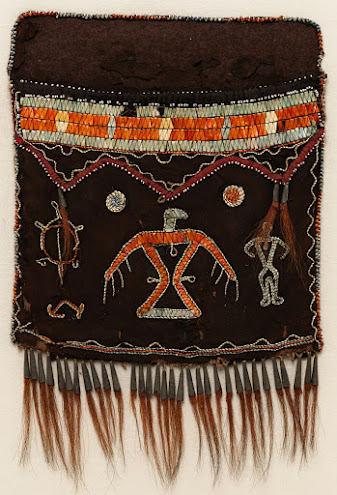 Ojibwa Bag, early Nineteenth Century
These objects follow a European form, and many of them rely on a technology that was not just foreign but radically new: the industrial techniques that allowed tiny glass beads to be produced cheaply and in huge quantities. The motifs are a mix: some can be traced in precontact Native American art, others are European, while still others seem to be new, springing from the imaginations of these artists. 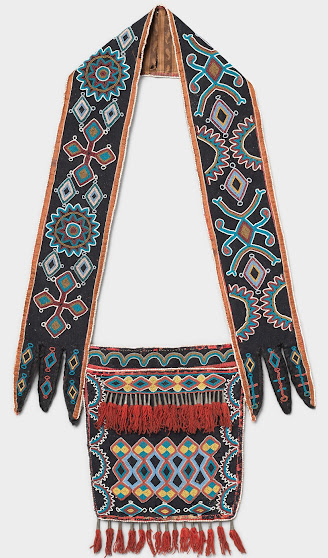 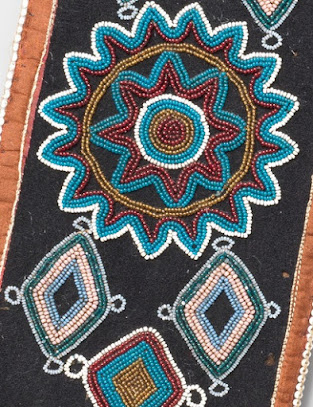 Bag Made in Kansas by a Delaware artist, Mid Nineteenth Century
The catalog notes that this bag stands at the beginning of the Plains Indian Beadwork tradition. This kind of glass beadwork, which many of us know best as it was made by the Lakota and Cheyenne artists in the late 1800s, was introduced to the region by Native artists from the east who were sent west by the US government to reservations in Kansas and Oklahoma.

Seminole Bag, c. 1830
The Seminole were of course in 1830 not yet much of a people at all, just an ad hoc assemblage of folks who had fled from the destruction of the southeastern tribes, along with a smattering of escaped slaves and white rogues. But some of them continued the artistic traditions they had brought with them on their flight to Florida.
The exhibit is full of fascinating objects, and I may be posting more later. But meanwhile marvel at these and think about the pride and creativity they represent, enacted against the the background of the catastrophe engulfing Native America.
Posted by John at 11:08 AM

The bags are leather and the form seems to have been inspired by the ammunition pouches worn by European soldiers.

I wonder if they were simply inspired, or if these bags were, in fact, ammunition pouches. After all, the reality is that guns became a daily fact of life for many Native Americans during the 1800s.

Even if these were strictly ornamental versions meant solely for formal usage, that's essentially no different than dress military uniforms incorporating ceremonial versions of functional fighting equipment. A formal, decorated ammo pouch would seemingly serve to convey both status and power, and seems like something one might wear to a treaty for purposes of pomp and circumstance.

You may be right. This might be one of the cases where what survives is the fancy version, and maybe there used to be hundreds of much less finely worked versions used for hunting and war.

I have been wondering how so many ended up in museum collections. Did maybe some of the chiefs who wore them give them as gifts when the treaty was signed, receiving in return a silver-inlaid rifle or some such?