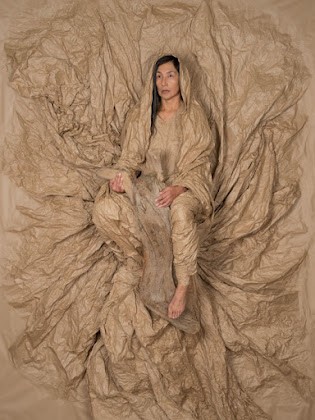 The archaeology of Istanbul's basements.

In Sidney, Australia, sulfur-crested cockatoos have learned to open trash bins. The behavior was invented at least twice, but has mainly spread by imitation, one bird to the next. (NY Times story, original article)

Tyler Cowen interviews Niall Ferguson about the history and future of Britain.

The plan to build America's largest solar plant, north of Las Vegas, is abandoned after opposition. We are going to run out of places to put solar panels long before we achieve carbon-free power by that route.

Rebecca Belmore, a First Nations artist from Canada, was one of the first Native Americans to be featured at the Venice Biennale. After perusing the images on her web site, my impression is that she absolutely belongs at the Biennale with all the other celebrity creators of avant garde "installations," "performances," and "events." However much her stuff grapples with identity and tragedy, most of it leaves me completely cold. One exception is at the top of this post.

An American dies of bubonic plague, in southwestern Colorado.

A disturbing racist incident among high school kids in a mostly white Michigan town leads to a tense debate over "Critical Race Theory" and the question of whether talking about race increases or decreases racism. Many parents say their kids never thought about race until the school system forced them to. I don't believe that, but on the other hand the liberal side keeps recommending more sensitivity training and I absolutely believe that makes things worse. (Washington Post)

A look at the Sacred Band of Thebes, an elite group of 300 warriors made up of male couples who had sworn a vow together. Interesting but unfortunately little is known about them beyond their bare existence, so most of the questions a modern has about them are unanswerable.

Remember the plot to kidnap Michigan Governor Gretchen Whitmer? It now turns out that half the people involved were FBI agents or informants, including the second in command. The defense being offered by the militiamen in jail is that the idea for the plot came from the FBI guys, who set everyone else up, and that most of them never had any intention of actually kidnapping anyone. If true, does that make this a brilliant operation to smoke out potential domestic terrorists or cruel government overreach?

In the 30 states that accepted the Medicaid expansion under Obamacare from the beginning, medical debt has declined by 44%.

Is our civilization getting more depressed? Or, given that this study is based on books, is it just the people who write books who are more miserable?

Images that compare giant extinct animals with their modern relatives.

We are going to run out of places to put solar panels long before we achieve carbon-free power by that route.

No, we're not going to "run out" of such places. We're going to stubbornly and pettily refuse to utilize them.

It's like the people who argue that we can't afford socialized healthcare - no, we absolutely can, we just prefer to dedicate our tax money to the most bloated military budget on the planet, spending three quarters of a trillion dollars annually on war, for no good reason. We could afford a staggering number of things that would do us good, it just would mean cutting back on our absurdly overblown "defense" budget, and we're just not willing to do that, despite how tremendously little of actual value we get out of the investment.

America is like a rich man slowly dying of malnutrition because the only food he is willing to spend money on is caviar and fine wine. He could easily afford a world class healthy diet, but refuses to shift funds away from his absurd luxuries toward basic needs.

The ethicist at the NY Times can get bent.

If you wouldn't keep a Nazi in your employ, you shouldn't keep employing a Trumpist. These are people who freely choose to actively champion real harm against innocent people for evil reasons. Tolerance demands that we do not tolerate the intolerant.