The Bloody History of Dundrennan Abbey, Carved in Stone 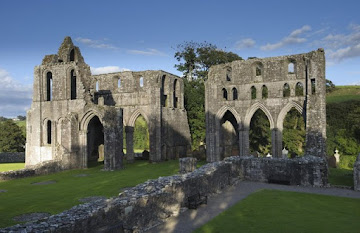 Dundrennan Abbey in southern Scotland was founded in the 12th century. None of its records survive and little is known about its history.

It's best known sculpture is this depiction of an abbot. 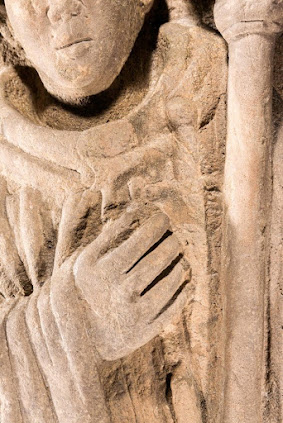 During recent restoration efforts, attention was drawn to this carving. Does that dagger on the abbot's chest show that he was stabbed to death? 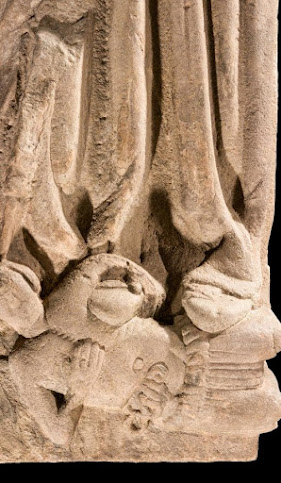 At the abbot's feet is this second figure, expiring from a stab wound in the belly. The scholars who made this announcement want it to be a story of an assassination, with the abbot depicted triumphant in the afterlife over the man who ended his time on earth.

Maybe. I mean, we know nothing about this place's history, so why not go with the most fun interpretation?

I'm a bit curious about why the dagger shape, specifically, would be carved intaglio, rather than in relief as every other detail is.

Could it have originally been that the hollow held a separate dagger piece made of another material, which was perhaps glued or otherwise affixed in place? That would be a visually striking choice, and it might also suggest that the abbot was not the victim of an assassination, but rather killed someone (presumably "righteously" and all that).

It's also interesting to note that the dagger shape is seemingly not of a typical gaelic design. I'm no expert on the weapons of that time period and location, but my understanding is that the Irish and Scottish both favored long, thin daggers without crossguards further back than even the 12 century - blades similar in design to Pictish daggers and the Germanic / Norse seax. The dagger shape present on the statue looks to my eye more in line with Italian blade styles - might that be meaningful? Perhaps this figure is not intended to be a local abbot, but rather someone originally from Southern Europe, like a bishop or a papal legate?

If that is the case, I'm not sure what that says about the statue's intended message (depending on whether the "abbot" was victim or killer). I could see logical explanations either way for the statue celebrating the figure as either a martyr or as a righteous purger.