Vaccinating Prairie Dogs against the Plague 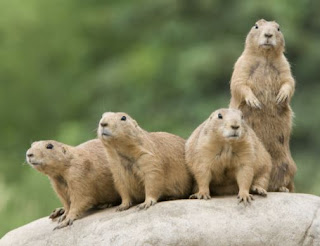 Biologists are testing a new oral vaccine to treat the Plague in prairie dogs. Most news accounts refer to this as the Sylvatic plague, but don't be fooled; this is our friend Yersinia pestis, the same bacterium that causes Bubonic plague in humans. There have long been vaccines for the plague, but it is very expensive to catch thousands of prairie dogs and give them shots. They also used to spread pesticide dust to control fleas, but nobody much likes the idea of spreading tons of flea-killing dust across what are supposed to be wild prairies. So everybody is happy that tests of the new oral vaccine, given by spreading peanut-butter flavored kibbles from airplanes or trucks, seem to be working out.

The point of vaccinating is not so much to protect prairie dogs, who have lived with the plague for centuries and so can obviously survive it, but to protect humans – about a dozen people get the plague every year in the US, mostly from hanging around wild rodents in the West – and endangered black-footed ferrets.

Plus, if we get good enough at this sort of thing it might have all kinds of uses, like controlling Lyme disease by vaccinating mice.

And while I'm on the subject, the answer to the dread question, what happens when the bacteria all evolve resistance to all our antibiotics, may turn out to be vaccines. There are effective vaccines against many bacterial diseases, and they work fine despite the minor evolutionary changes bacteria can pull out of a hat whenever they encounter an obstacle..
Posted by John at 8:18 PM

"The point of vaccinating is not so much to protect prairie dogs, who have lived with the plague for centuries"
Only one century.

I tried to look this up, and I find that there is a major division of opinion. Some people think that bubonic plague came to North America with the first waves of European disease in the 17th century, and so might well have been on the western plains by the 18th. This was the view I was referencing. Others hold with the view that I suppose pithom had heard, that the plague came to San Francisco around 1900 and spread from there to the prairies by around 1910. This was part of the third great outbreak of the plague, which crossed from central Asia into China around 1860 and reached Hong Kong in 1894, spreading thence around the world on ships and killing at least 10 million, mainly in India. The plague bacillus was isolated by two researchers in Hong Kong in 1894; one of them was Alexandre Yersin, who gave his name to the organism.

It ought to be possible to find out via genetic testing of plague bacilli in Colorado which theory is correct, but I can't find that anyone has done so. And I suppose it might be that the Asian form had replaced the earlier European form.

Anyway, I find this sort of thing fascinating.