The Navy Stands Down 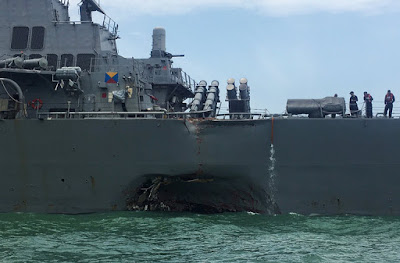 After two fatal collisions between US Navy destroyers and giant cargo ships, the Navy has replaced the commander of the 7th Fleet and ordered a two-day "suspension of ship operations" to review operating and safety protocols.

The Navy brass is being very tight about this business, but if you know the Navy you know what they are arguing about behind the scenes. These days the Navy fights with airplanes, long-range missiles, and commandos. Its officers spend most of their time at Annapolis studying engineering, because of all the hi-tech systems they need to manage. Many regard the Navy as a giant career ladder that they spend their time in the service climbing, wondering when is the right time to cut out for a lucrative management career with some defense contractor.

A faction of Naval officers has long been very worried about all of this. They fear that the Navy is losing what ought to be its core competency: sailing ships. Good sailors do not accidentally blunder into giant cargo ships in the open sea, as in the first of the two recent incidents. And in a crowded place like the Malacca Straits, they exercise extreme caution to avoid collisions.

So I'm sure that in the Pentagon and at the Washington Navy Yard there is a lot of shouting about whether the Navy is judging officers by everything except how well they can handle ships, and whether that needs to change.
Posted by John at 11:14 AM

Did no radar or other detection system warn anyone? What, no bells, no whistles, no flashing signs as these two colossal ships closed fast upon their's? My car will start slowing down without my assistance if I get too close to the car in front of me. I've read, and the navy brags, that the radar detection systems on these vessels are capable of detecting up to 100 simultaneous threats. What about listening devices that can hear near silent submarines? These systems can detect incoming, fast moving missiles from above and submarines from below, but NOT a freighter trolling across their bow so huge it carries several freight trains worth of cargo containers?
Have yet to hear the navy say the detection systems worked?

I am the very model of a modern Naval Admiral
I've information technical, logistical, pragmatical
I know the laws of Asia and of all the waters tropical
From Singapore to Nagoya and other places nautical
I'm very well acquainted too with matters much more tangible
I understand ballistics whether jacketed or frangible
About first stike deterrence I'm teeming with a lot of news
With many cheerful hopes that it will never prove to be of use

I'm very good at signaling in person or by radio
A missile boat, a carrier, or Navy Seal team commandos
In short in matters technical, logistical, pragmatical
I am the very model of a modern Naval Admiral!

In short in matters technical, logistical, pragmatical
He is the very model of a modern Naval Admiral!