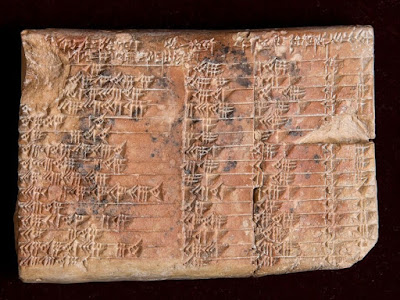 Last weekend all the science news sites and many regular news outlets carried stories about this 3,700-year-old Babylonian tablet, known as Plimpton 322. They all reported that it had either been shown to be (for the bold majority) or claimed to be (for the cautious few) a trigonometric table based on ratios rather than angles. But these stories were obviously written by reporters whose math is about as good as their cuneiform, so I was unable to tell from them what had actually been claimed, how plausible it was, or how this table of ratios was supposed to work. (I saw in several places the claim that this table is more accurate than modern trig tables, which is absurd since with a computer we can run the numbers out to a million decimal places if we feel like it.) I hate writing about things I don't understand, so I held off.

But now the Times has found a mathematically literate reporter to do a follow-up story, and his explanation is fascinating. He asks, how would a Babylonian scribe have gone about solving this problem:


Suppose that a ramp leading to the top of a ziggurat wall is 56 cubits long, and the vertical height of the ziggurat is 45 cubits. What is the distance x from the outside base of the ramp to the point directly below the top?

Perhaps using a table like the one on Plimpton 322. Plimpton 322 is a list of 15 numerical triads, all of which are Pythagorean triples – numbers for which a2 + b2 = c2, like 32 + 42 = 52. But these are not randomly chosen triads. They are placed in the ascending order of the ratio of the hypotenuse and the short side.


A Babylonian faced with the ziggurat word problem may have found it easy to set up: a right triangle with the long side, or hypotenuse, 56 cubits long, and one of the shorter sides 45 cubits. Next, the problem solver could have calculated the ratio 56/45, or about 1.244 and then looked up the closest entry on the table, which is line 11, which lists the ratio 1.25.

From that line, it is then a straightforward calculation to produce an answer of 33.6 cubits. In their paper, Dr. Mansfield and Dr. Wildberger show that this is better than what would be calculated using a trigonometric table from the Indian mathematician Madhava 3,000 years later.

The modern answer is 33.3317, so obviously the Plimpton 322 method is not perfect. But it would be useful in many circumstances. Which one reason why I think this is a perfectly plausible explanation of this mysterious tablet; some Babylonian scribes were obviously fascinated by the relationship between mathematical arcana and real-world problems, and this is just the sort of thing they might have been into.

The second reason is that it conforms to our understanding of how math has evolved. It seems that many general theories, like the fully-developed Greek theory of angles, are proceeded by numerous glimpses of the underlying principles, and by lists of examples of the theory at work. The generalization of a principle is usually the last stage of a long process. This was especially true in the ancient world, when mathematical advances were usually driven by specific problems in surveying or astronomy. As this example shows, Babylonian scribes often made use of right triangles in their calculations, but so far as we know they never wrote down what we call the Pythagorean Theorem in its abstract form. Some moderns insist that they must have understood it even if they did not write it down, but that is probably a mistake. The drive to create perfectly expressed universal theorems is not that common even among modern people who use complex math; modern physicists and statisticians use mathematical tricks all the time that have never been formalized or proved, because they seem to work, and Babylonian scribes probably used math in the same way.

Because of the great interest, Historia Mathematica has made the original paper by Mansfield and Wildberger available online; but I still recommend  Kenneth Chang's Times piece as the better explanation.
Posted by John at 8:09 AM

Thanks for the reference. This is why, after the Wapo, and NYT, I read your Blog!