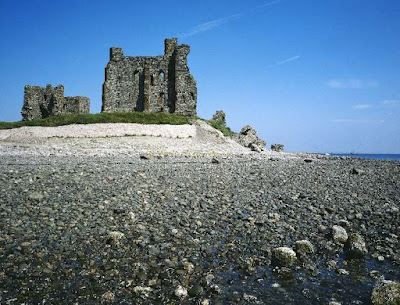 Today's castle is Piel on northern England's west coast. It was built in the early 1300s by the Abbot of Furness to control the harbor of Barrow Haven, now called Barrow-in-Furness. Besides protecting the abbot's customs revenue it served as a refuge against Scottish raids, a common occurrence so close to the border. 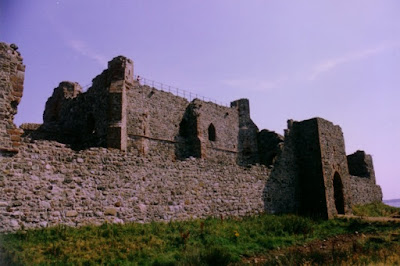 The castle was largely built of stones from the adjacent shore. Not much happened there until 1487, when a pretender to the English throne named Lambert Simnel landed there and held court for his followers. 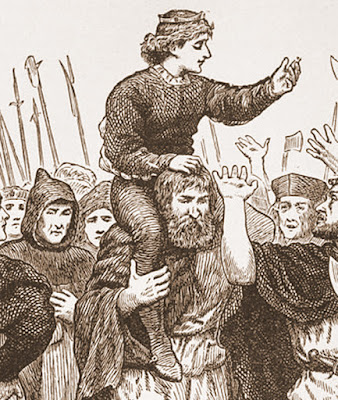 Lambert Simnel, which was almost certainly not his name, was a ten-year-old boy. He was put forward as an heir to the throne by Yorkists looking for a way to overthrow Henry VII, who had just become king in 1485 by defeating Richard III in battle, mutilating his body, and burying it under a parking lot. Ok, maybe the parking lot came later. 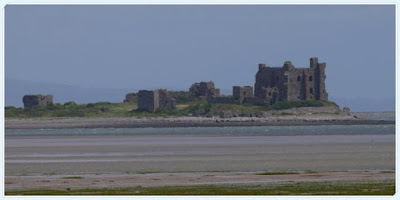 Simnel's followers claimed that he was Edward, the Earl of Warwick, who was supposed to be locked in the Tower of London. This would have given him a claim to the throne at least as good as Henry's. Margaret of York, the Duchess of Burgundy, advanced the money to hire 2,000 Flemish mercenaries on the boy's behalf, and he landed in Ireland where Henry Tudor was not popular. The boy was crowned Edward VI in Dublin, by the archbishop. Lord Kildare raised some Irish soldiers on his behalf, and with a force of Flemings, Irish, and Yorkist stalwarts he crossed to Piel Castle and then to the mainland. But Henry Tudor knew they were coming, raised a larger army of his own, and destroyed the rebels at the battle of Stoke Field (June 16, 1487). This is a very obscure battle but it deserves to be more famous; at least 15,000 men were engaged and it was really this crushing victory, not Bosworth, that established the Tudor dynasty on the throne. Most of the leading Yorkists were killed, and they never seriously opposed the Tudors again.

But who, really, was Lambert Simnel? According to wikipedia and all the other obvious online sources he was an impostor, a poor boy who was made a Yorkist tool. He had been picked up by a priest named Richard Simon who thought he looked enough like Edward IV to pass as one of his missing sons, the Princes in the Tower. Simon trained the boy how to act like a nobleman. Simon then introduced the boy to John de la Pole, the Earl of Lincoln, who made him the focal point of the rebellion. After the rebellion, Henry "realised that Simnel was merely a puppet for the leading Yorkists" and pardoned him, offering him a job in the royal kitchens. 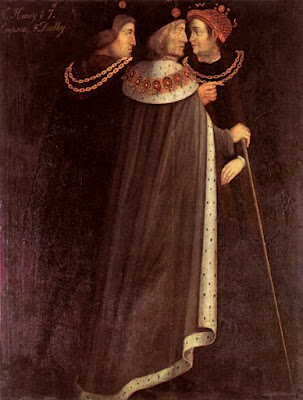 Henry VII and Two of his Advisers

But where does this information come from? From Henry's government. Absolutely every account about the supposed "true" identity of Lambert Simnel comes from a Tudor source, and most of them relied on a royal inquest convened in the wake of the failed rebellion.

Now maybe the published findings of the inquest were true; but how would we know? If the Yorkists had been victorious at Stoke Field – which they might well have, it was a near-run thing – would anyone now believe that story, or would we consider it obvious propaganda from a desperate, failing regime? Can we really trust a Tudor inquest into the parentage of a rebel against them?

Here, I think, is a good litmus test for the attitude of historians toward our sources. Many historians, I suspect most, would say that we have good reasons for doubting the identity of the supposed Earl of Warwick. They would be very skeptical that the Tudors could have succeeded so well in painting the rebel as a poor fraud if he had really been a noble scion of Neville and York. Could royal propaganda really have convinced a whole nation of a completely untrue, made-up story about an important historical figure? 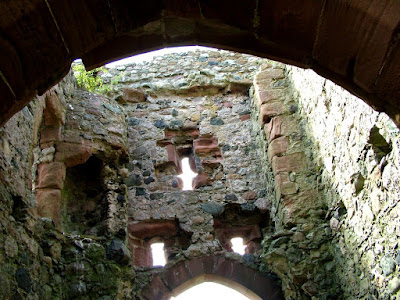 Why yes, others would answer. To think otherwise is to doubt the contingency of history; if the Yorkists had been victorious at Stoke Field, the boy would have become king, and his proclaimed genealogy would have become the truth.

But no, answer the first group; history isn't something we make up as we go along, it is a record of what happened. Sometimes it is hard for us to figure out what happened, but it is also hard to fool us. We know about hundreds of plots, frauds, and conspiracies from times less well documented than England of the 1480s, and this should give us confidence that few plots or frauds make it into the records unquestioned. A partisan tale may hold the field for a while – the Lost Cause, the Stab in the Back – but other sources always record alternative narratives, and by careful sifting we can work out which one is closest to the truth.

How naïve of you, answer the skeptics, to think that the truth always wins out in the end, or to think that history is such a wise and all-seeing goddess that she can never be fooled. 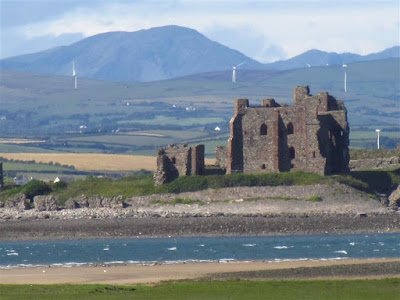 Whether truth won out or no, the Tudors certainly did. Piel Castle was abandoned as a defensive post and became a base for harbor pilots. Parts of the outer wall were restored in the 19th century, to protect the rest from the ocean, but mainly it has moldered away, along with the memory of Lambert Simnel, who almost became king of England.
Posted by John at 7:59 PM