Disaster Sells, or, How Bad is the Flooding in Houston? 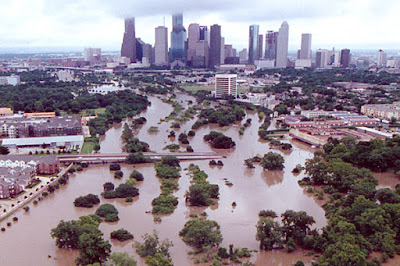 I have been frustrated over the past few days at my inability to find out how bad the flooding around Houston really is. Fifty inches of rain is an astonishing amount, as the National Weather Service says "unprecedented," so it might turn out to be one of our worst disasters ever. But is it? and how would we know? Because for news people, catastrophe sells, and nobody ever got higher ratings by downplaying a natural disaster. So they just repeat over and over again that everything is "catastrophic" and "deadly" and show the same images of flooded parts of the city. Like the one above, which has been everywhere. But what is that a picture of? A river. And what do rivers do in hurricanes? They flood. Is this worse than in past hurricanes? Who knows? 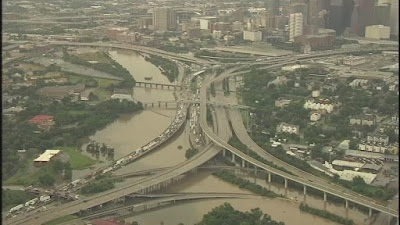 Ok, I get it, this is a bad flood. Interstate highways blocked, etc. But I can't tell how bad, and I don't think anyone can tell how bad from the string of scary superlatives on the news. Is this Katrina in New Orleans, or Isabel in Baltimore? 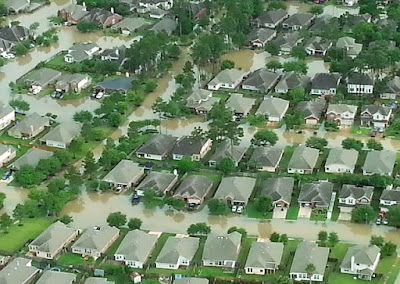 Here we have a flooded neighborhood, and this looks pretty bad. But is this a low-lying neighborhood next to a river, or is it typical? The Houston Chronicle (which is full of dire pictures but seems to have no trouble publishing) has this item:


As the waist-deep waters have receded from Meyerland, a middle-class neighborhood fronting Brays Bayou that now has flooded three times in three years, residents face an agonizing choice: Give up on the neighborhood or try to rebuild?

Was it worse this time, or not? 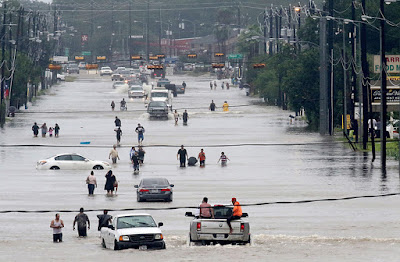 Last night I saw a headline proclaiming that 17,000 Texans are in shelters, which is rough for them, but on the other hand there are about 6 million people in greater Houston, so clearly most of them have so far been able to take care of themselves. The Times says that 7,000 people have been rescued from flooded houses, but again that in only 1 in a thousand Houston residents.

I also understand that it can be hard to tell how bad a disaster has been until it is over and crews can reach the most devastated areas. The Houston medical examiner said last night that the death toll is bound to rise as people get to houses now flooded and cut off. But so far as I can see, nobody is really trying to make an accurate assessment, and I really wish somebody would.
Posted by John at 9:33 AM

By this time during the Baton Rouge flooding last year, there were publicly-available flood maps, so anyone could look and tell how much of the area was flooded. Haven't found any of those for TX yet. Also noticed there is very little info on how deep the water is anywhere.

NYT has taken a stab at quantifying things here: https://www.nytimes.com/interactive/2017/08/28/us/houston-maps-hurricane-harvey.html

They're getting some of their info from Houston Transtar-- a traffic reporting service: https://traffic.houstontranstar.org/layers/

Going by those, I'd say the reporters aren't blowing it too far out of proportion. I do kind of want to reach through the screen and throttle them when they ask people who just lost everything they owned, or worse, family members, "how they're handling it, emotionally"-- poke, poke, poke, let's see if we can get you to cry in camera...