The Genetic History of Apples 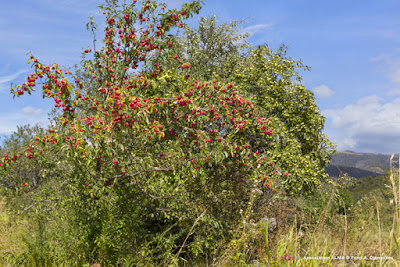 Chinese and European apples have long been thought to be descended from a wild species called Malus sieversii that grows in central Asia, but they are actually quite different. Why?


The team say the finding suggests that modern cultivated apples have their roots in the trees of Kazakhstan, growing to the west of the “Heavenly Mountains” – the Tian Shan.

Previous research has also suggested that these apples were brought westward by traders along the Silk Road. But the trees which took root, either from deliberate planting or from discarded apple cores, did not grow in isolation: they cross-pollinated with wild species in the area. In particular, researchers have said, the European crabapple, whose small, sharp-tasting fruit is used to make cider.

The new study, says Bai, suggests the resulting apples were large – a trait passed on from Malus sieversii – while the crabapple contribution appears to have made the apples firm and tasty.

Indeed the new research suggests about 46% of the genome of modern, domestic apples is likely passed down from M. sieversii plants from Kazakhstan, with 21% from the European crabapple and 33% from uncertain sources. As the trees were subsequently selected and bred by humans, the apples’ traits continued to be refined for larger size, better flavour and firmness. 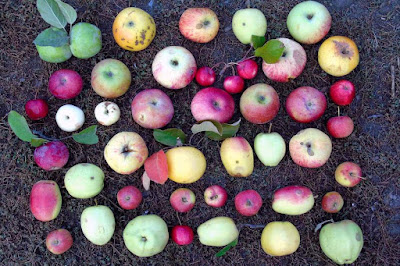 Chinese apples are also hybrids, and the difference between Chinese and European apples was created mainly by the different local species with which Malus sieversii  interbred. Fascinating.
Posted by John at 10:59 AM