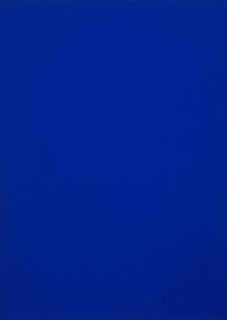 In the New Yorker, Peter Schjeldahl explains in one paragraph about French artist Yves Klein everything I hate about contemporary art:

Hanging in a gallery near the St. Rita piece, in a sumptuous retrospective at the Hirshhorn Museum, in Washington, D.C., is a drawing in which the word “humility” is repeated twenty times.

It’s not easy now to associate humility with the perpetrator of such audacities as monochrome paintings in a color he patented as International Klein Blue (it is ordinary ultramarine pigment, with a polymer binder to preserve its chromatic intensity and powdery texture), big pictures made by I.K.B.-smeared naked women pressing or rolling their bodies against canvases, and a heavily promoted Paris gallery show that consisted of exactly nothing (“The Void,” 1958). There was also the rigged photograph of himself apparently leaping from the second story of a building, with an expression of rapt confidence in continued flight (“Leap Into the Void,” 1960); a chamber-orchestra “symphony” that held a single note for twenty minutes, followed by twenty minutes of silence; paintings made with the aid of torches, or by exposing canvases to wind and rain; fountains combining water and fire; and assorted architectural ideas, including one for a city under a weather-deflecting roof of blowing air. Then, there were the Immaterials. For these works, a collector paid Klein a set price and was given a receipt for the sum. Klein then spent the money on gold leaf, which he strewed over water—most often, the Seine. At that point, the collector burned the receipt, consigning the work to mere memory.

Conservative critics sometimes say that what happened to art in the twentieth century was that it lost its soul, and substituted the artist's ego for the divine vision. The career of Klein suggests that this was not quite the problem, because he combined serious, lifelong Catholicism with an omnivorous hunger for spiritual enlightenment that took him into studies of Buddhism and the Rosicrucians. At least in some of his work he had a serious spiritual purpose. IKB was supposed to be the color of eternity, and his monochrome blue paintings were supposed to lead the viewer's mind up to heaven. I think Klein's work shows that the problems with contemporary art lie elsewhere than spiritual poverty: contempt for outsiders, excessive intellectualism, and a shift of focus from the work of art to the life of the artist as an ongoing performance piece.
Posted by John at 5:13 AM