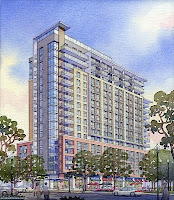 The DCMUD blog, which follows developments in Washington Real Estate, has several announcements about big new construction projects this week, one of which begins this way:

As the financial downturn slowly releases its hold from DC development, increasingly large projects are beginning to set timelines, even without tenants. Underscoring that point is Archstone and Hines Interests' redevelopment of the old Convention Center site, a plan has been mired in delays, with one groundbreaking schedule after another falling to the wayside. Developers are now claiming that the project will begin early next year. . . .

Of course Washington, center of the free-spending federal government, is weathering the recession better than most places, but there wasn't much activity like this last year. The picture is of a 17-story residential and retail building planned for suburban Bethesda, near the Metro.
Posted by John at 7:13 AM