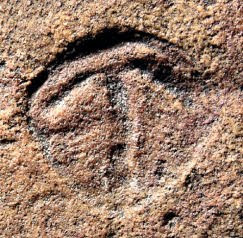 Nice summary article on the strange fossil life forms of the Precambrian, by Sean Carroll at the New York Times. With slide show.

As the article indicates, the big mysteries of paleontology -- how did Cambrian life emerge from nothing, and why did the explosion happen when it did -- are becoming less mysterious. Such a wide diversity of life forms has now been documented from 635 to 542 million years ago that this epoch has now been formally dubbed the Ediacaran Period. It was once said that none of the Ediacaran life forms seemed to be related to modern life, but now paleontologists are positing possible relationships. And the emergence of Ediacaran life can be connected to the rapid rise in oxygen levels in the ocean at the end of the great ice age called "snowball earth."

There are mysterious in science, but there are also ways to make progress. And the more we learn about the distant past, the more sense evolution makes. However, the alleged fossil above is clearly the mark of the devil's cloven hoof, left during the age when he ruled the earth.
Posted by John at 8:56 AM