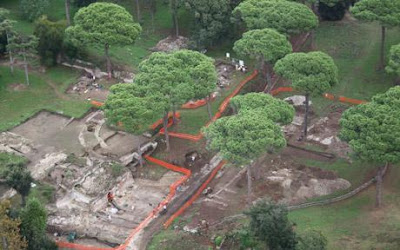 The Romans, they liked to build things, and with ground-penetrating radar and magnetometry, more and more of them are being discovered:

Scholars discovered the 100-yard-wide (90-metre-wide) canal at Portus, the ancient maritime port through which goods from all over the Empire were shipped to Rome for more than 400 years.

The archaeologists, from the universities of Cambridge and Southampton and the British School at Rome, believe the canal connected Portus, on the coast at the mouth of the Tiber, with the nearby river port of Ostia, two miles away.

It would have enabled cargo to be transferred from big ocean-going ships to smaller river vessels and taken up the River Tiber to the docks and warehouses of the imperial capital.

Until now, it was thought that goods took a more circuitous overland route along a Roman road known as the Via Flavia.

"It's absolutely massive," said Simon Keay, the director of the three-year dig at Portus, the most comprehensive ever conducted at the site, which lies close to Rome's Fiumicino airport, 20 miles west of the city.

"We know of other, contemporary canals which were 20-40 metres wide, and even that was big. But this was so big that there seems to have been an island in the middle of it, and there was a bridge that crossed it. It was unknown until now."

This newspaper article doesn't explain how this thing was dated, but this is what they say:

Work on the massive infrastructure project began under the emperor Claudius. It was inaugurated by Nero and later greatly enlarged by Trajan.

Portus is largely buried and much of it seems to be undisturbed, so many more discoveries may be made there in coming decades. That is, if Italy doesn't ban all future archaeology because they can't protect half of the things that have already been uncovered in the country.