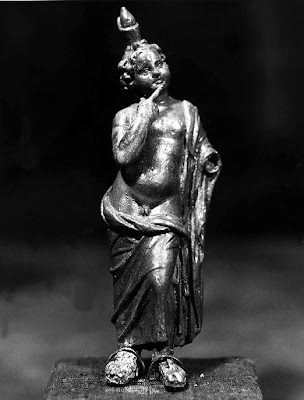 I stumbled across a news article this week that mentioned the discovery, in Britain, of an image of Harpocrates, "god of secrecy and silence." I confess that I had never before heard of Harpocrates, so I looked him up. Wikipedia:


In late Greek mythology as developed in Ptolemaic Alexandria, Harpocrates is the god of silence. Harpocrates was adapted by the Greeks from the Egyptian child god Horus. To the ancient Egyptians, Horus represented the new-born Sun, rising each day at dawn. When the Greeks conquered Egypt under Alexander the Great, they transformed the Egyptian Horus into their Hellenistic god known as Harpocrates, a rendering from Egyptian Har-pa-khered or Heru-pa-khered (meaning "Har, the Child") . . . .

In this way Harpocrates, the child Horus, personifies the newborn sun each day, the first strength of the winter sun, and also the image of early vegetation. Egyptian statues represent the child Horus, pictured as a naked boy with his finger on his mouth, a realization of the hieroglyph for "child" that is unrelated to the Greco-Roman and modern gesture for "silence". Misunderstanding this sign, the later Greeks and Roman poets made Harpocrates the god of Silence and Secrecy.

Note that our basic vocabulary of gestures seems to go back to ancient times. Raising the middle finger has been an offensive act since the Romans, and from this research on Harpocrates I discover that the "shhh" gesture of lifting the finger to the lips was also goes back at least to the 300s BC.

I can't find anything about what Haropcrates meant to the Greeks and Romans who displayed his image. Probably people liked him for the same reason they were fascinated with "mystery" cults: their assumption, widely shared in our species, that truly important or divine information will not be public, but kept secret. I have always been fascinated by the way the Greeks and Romans liked to equate gods from different traditions with their own, giving us constructions like the temple of Zeus/Ra/Ahura Mazda. Or the image below, which seems to combine Harpocrates with Eros, perhaps as a statement about discretion in love: 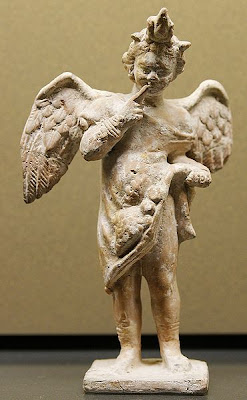 In the Renaissance Harpocrates was rediscovered by the magi, who found in him an appropriate symbol of their own obsession with secrecy. They believed that there must be some secret, hidden knowledge that would reconcile the apparent conflicts between different religions and different schools of thought, kept hidden because of its potency. They also lived in real danger of persecution by the inquisition or other authorities for their heretical thought and as a result they were almost always elusive or allegorical in their writing. The image below connects Hermes Trismegistus, the pseudo-god of occult wisdom, with Harpocrates.