As Paul Krugman points out here, and Matt Yglesias here, leading Republicans have lately been saying very strange things about taxation and the economy. Here is Senate Minority Leader Mitch McConnell on why he wants to extend the Bush tax cuts:

There’s no evidence whatsoever that the Bush tax cuts actually diminished revenue. They increased revenue, because of the vibrancy of these tax cuts in the economy.

This is false. Either McConnell is lying, or he has completely lost touch with reality. (Thoughts?) Here is the data, from the Federal Reserve, showing that Bush's tax cuts led to a major shortfall of revenue compared to what had been projected before the election: 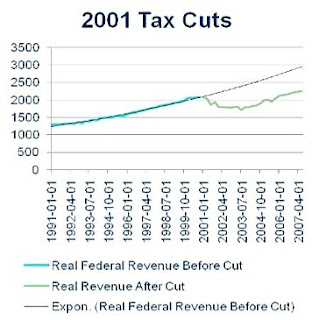 So the assertion that tax cuts raise revenue, a central plank of the conservative movement, is wrong.

What about the economic effects? I have no particular ideological conviction about what levels or taxation or spending lead to the best economy. (As opposed to, say, torture and free speech, about which I have very strong views.) So my approach is to look at the historical data and see what works. What I see is that the American economy has never been stronger than it was in the 1990s. Therefore, the levels of taxation and spending we had in the 1990s are at least compatible with rapid economic growth. Bush sold his tax cut with the idea that it would make the economy even better -- he talked about extending the boom into areas like urban slums and the rural south that had done badly in the 90s -- or at least keep the boom going. Actually, of course, the economy performed much worse after the tax cuts than it had before. I don't think the tax cuts were responsible for the problem, but this history shows that tax cuts are no magical formula for economic growth.

Once more I am impressed by how far modern conservatives have wandered from reality.
Posted by John at 7:30 AM