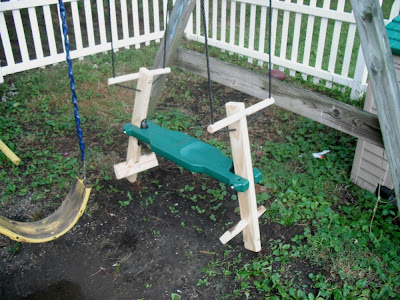 Here it is, about two weeks after I opened the box: the new swing. Assembling it should have taken about ten minutes, except that it was built by clumsy orangutans. The holes in the foot rests didn't line up with the holes in the upright pieces, so I had to redrill them, which was such a laborious task that it drained the battery in my drill, which is what stopped my momentum the first time. The resulting new holes are way too close to the old holes and they are bound to break through soon, but I thought that since it was just the foot rests it didn't matter too much. When I finally got around to recharging my drill and finishing the holes, I discovered that the bolts that attach the hand grips were too short. So I set it aside again until I got to Home Depot to buy new bolts, which I finally did tonight. Lisa did a little online searching and found lots of similar complaints from other buyers of this absurdity. The manufacturers offered to replace it for us, but I figured the new one was likely to have the same problems, and since is the one that goes with our swingset I didn't feel like trying another brand. And now that it is up, it seems to work fine. 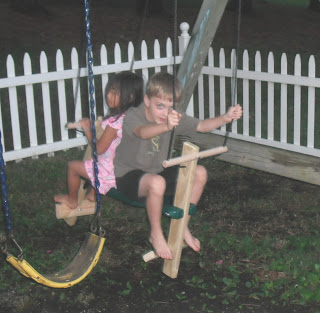 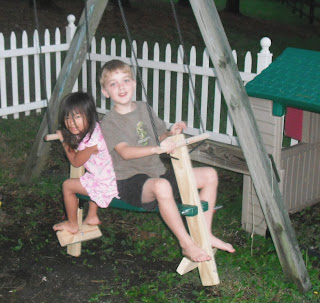